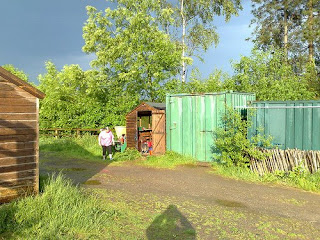 One of the things I love about being back at Wyndham Livery is that it is so well organised. Yes it is quite a bit more expensive than other places I might be able to find to keep Dee and Red, but there are many benefits that go above and beyond mere expense. Both of the horses are now looking really well - their coats have a lovely sheen to them again and they both look as though they are about the correct weight. It is such a relief to feel they are well and content. I am too inexperienced a horse owner to keep them somewhere that is even more DIY than here - I need the support of a yard manager who has the expertise and experience I lack.

The photograph shows the little shed that we are allocated for storing our feed and tools. I love the quality of the light in this photo (as well as the shadow of 'ö-Dzin taking it!). It has been balmy and cloudy here, continually feeling as though the weather is building towards a thunder storm. Here the sky had become quite lowering, yet the light was still bright.

As well as the shed, we also have a place in a secure lock-up to keep our tack, and space in another little room for our cupboards for storing hats, chaps, numnahs and other miscellaneous horse-related paraphernalia. The livery has a daily routine and is efficiently maintained. The horses clearly like the routine. There is an air of it being a place that is thriving which I like - it creates a positive and healthy atmosphere. I have heard that some livery yards suffer from interpersonal conflicts - that there can be cliquey groups, lack of consideration, the 'borrowing' of people's gear, and such like. Fortunately I have never experienced this. At Pontcanna everyone was friendly and helpful, at Ridgeway I found the same, and now at Wyndham this is also true. My experience of 'horsey' people generally has been that they are kind and sensible people who put their animal's needs before their own.

I thought I would explain the name of my blog in case any of you were curious - although I am sure you will have guessed. 'Ceffylau' is Welsh for horses. Although I am English by birth originating in the Midlands, I have adopted my husband's country. Both our sons are Welsh, so I really think of myself as Welsh more than English these days. 'ö-Dzin and I started trying to learn the Welsh language about five years ago. Although he is Welsh born, Cardiff is not a very Welsh city and the use of the Welsh language has only become more common and more encouraged in the last fifteen years or so. For the first two years of learning Welsh I attended classes several days a week, and this has given me a good basic grounding in the language. However once we became involved in horse ownership there was no longer time in my week to attend classes, so I have been attempting to carry on learning on my own. 'ö-Dzin and I try to talk to each in Welsh a little every day, and I have various books and cds to help me. He still attends classes as these are sponsored by his employer, Cardiff University. 'ö-Dzin particularly enjoys Welsh language music, and I often hear him singing to Red in Welsh as he grooms Red and I groom Dee. I think they enjoy this (and so do I!).
Posted by Nor’dzin at 21:58