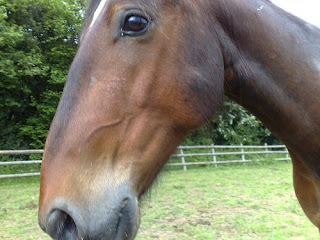 It has been a holiday weekend here in Wales and so of course we have had a lot of rain! Everywhere is so beautifully lush and green - it's worth a few days of rain to enjoy the beauty of Wales. However two years ago it started to rain at about this time of year and then rained nearly every day until September. I cannot help hoping that it will not be another summer like that one. I try to always appreciate whatever my environment provides and dwell in the moment as it is - rather than missing the present moment through wishing it were different. However continual rain throughout the summer, and then going straight into winter, can make life with horses rather hard work. If continual rain is the way it's going to be, then I shall have to encourage appreciation of squelching through mud, delight in the steam rising from wet horses in the stable, and continue to enjoy the verdant foliage.

One of our students is staying with us for a solitary retreat in our retreat hut this week, but before she went into retreat she came for a ride with me. I rode Red as I have not ridden him for a while now that 'ö-Dzin rides him several times a week. The horses were most reluctant to go out because they knew it was about to start raining. We had to really encourage them to walk along the track out of the livery yard. Once it had actually started to rain - and we were clearly carrying on with the ride - they relaxed and were quite happy to go out. This made me wonder. Did they think that we did not realise it was about to rain? Did they think that we probably would not want to be out in the rain and were trying to let us know? Or is this too intellectual an interpretation of their behaviour? We did get rather wet but still had an enjoyable ride. Much as I love to ride Dee, it was good to ride Red for a change.

There is only one part of the Coed y Wenallt horse trail that is easily accessible for a short evening ride. The whole circular trail, going in a clockwise direction, takes a little over an hour of which the last 20 minutes or so is a steep descent down a narrow road. So when we only have time for a short ride in the evening we generally do only some of the first part of the trail. This is mostly pretty level and there are a few places where we can have a canter. Equestrians are only allowed on this one trail through the wood, whereas walkers are allowed on all the many trails through the wood. It can therefore be a little frustrating when it becomes impossible to do more than a walk for practically the whole ride because of meeting so many walkers with their dogs. The dogs are often running loose and Dee can find this quite unnerving - especially if she can hear them but not see them in the undergrowth. On Friday a jogger ran right up behind Dee. She was very good and did not react, but if she had been frightened by him running so close up behind her he could have got kicked. I wonder why so many walkers and joggers use the horse trail when there are so many other paths available to them and not to us? I have heard walkers complain that they were frightened by horses racing through the woods - but if you walk on the horse trail then you are going to meet horses.

'ö-Dzin usually takes the horses out to the field after their feed while I muck out the stables. On the evening that the above photograph was taken, Red did not seem to want to leave him. He stood by 'ö-Dzin after he had taken off his halter and followed him when he walked back to the gate. Every time 'ö-Dzin moved, Red followed, whereas usually he trots straight off up to the top field to join the other geldings. In the end 'ö-Dzin walked up to the top field and Red walked quietly beside him at his shoulder. He did not leave 'ö-Dzin until he saw the other geldings. Red has not done this again since, but 'ö-Dzin found it a heart warming and touching experience.
Posted by Nor’dzin at 22:26

I agree with you about people jogging and letting their dogs run loose on the horse trails - it's not fair and they usually seem oblivious to the dangers. But how lucky to have good trails right by the stable. Your story about Red and 'o-Dzin is really lovely. Red is a very sensitive guy, and I'll bet the longer you own him, the more loving he will be. Walking beside my horses is one of my favorite things. It makes me feel very accepted by them.

One way to improve the riding is to collaborate with the British Horse Society, which has achieved some notable successes in obtaining better access for riders.

Another idea that has worked in Britain is for riders to band together, perhaps along with riding clubs and BHS representatves, to negotiate "toll rides" with local landowners.

Around here, dog owners usually are quick to control their dogs when horses appear. Maybe some are afraid that their dogs will be kicked or trodden on, however most seem quite considerate.

The horse trails around here are indeed the result of a lot of dedicated people negotiating with land owners and the council. The dog owners are mostly friendly and considerate - but I still wish that occasionally we could just have the horse trail to ourselves so that a relaxed canter of reasonable duration is possible. It is fun for us and fun for the horses. Otherwise the only opportunity we ever have to canter is round the arena, which is quite a different experience.