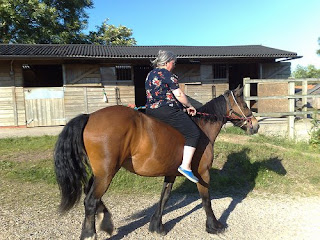 When I started riding again about six years ago - after a gap of approximately twenty five years - I went to a riding school and had lessons. These were practically the first lessons I had ever received. I learned to ride when I was about eleven at a riding stables near Solihull Lodge, just outside Birmingham. I doubt such an establishment would be able to exist today, as being taught to ride consisted of being put on a horse in a training ring and just going round and round at different paces until it seemed that you were staying on okay and managing to post at the trot. The girl who was in charge of teaching had been taught to ride by gypsies. Her lessons included bareback riding, where we were told to lean right back, almost lying on the horse, to find our balance.

Although I appreciate that such methods of teaching are insufficient to aspire to disciplines such as dressage, or to become a proficient show jumper, they did imbue me with an instinctive sense of riding. My riding may have been crude (and probably still is), but I was relaxed and confident, and capable of riding even the most difficult horses at the stables - and in fact used to prefer one spirited pony that most of my group would not ride. After only a few weeks of these basic lessons I was going out on hacks. After a further period of time, I was leading groups out on hacks. At a weekend we would regularly hire out several of the horses for a few hours and would be able to just take them off on our own. I'm sure such freedom of access to riding stable mounts would not be possible these days.

Despite my lack of formal training I must have acquired something of a reputation as a capable rider, as I always had access to a horse that the owner needed exercising. I enjoyed the freedom of in effect having my own horse throughout my late teens without actually ever being able to own one, as this was beyond my parents' means. One horse I cared for - a six year old called Whiskey - was known as a 'horse-without-brakes', but I used to ride out on him for whole days, often alone, without any problems. Another horse I exercised for a lady had the most uncomfortable saddle it has ever been my misfortune to sit upon, so I used to hack him out bareback. I used to come off fairly regularly, but still had fun.

So it was with pleasure that I climbed on Dee's bare back to ride her down to her field. I put the training pressure halter on and looped the lead rope round to make a rein just in case she decided this was a great opportunity to race to the field. But no, she was quite happy and relaxed and we quietly plodded down the lane.

Half way down the track it occurred to me that I would have to get off! I have had to adjust how I dismount since injuring my knee. I can no longer vault off athletically as I used to, but have to slide off slowly in order to ensure that I touch the ground with as little impact as possible. This controlled slide was not going to be possible to achieve without a saddle and a stirrup to assist my descent! It brought an aspect of my Buddhist training clearly to mind - a reminder that our consciousness is mounted on our current physical form and that one day we shall all have to face the experience of dismounting from it. We may try not to think about our mortality but our death is actually the only thing in our life we can totally rely upon occurring. As a Buddhist I try to notice the 'little deaths' that continually happen - the death of the moment, of an occupation, of a state of definition. The Nor'dzin who was writing this before you actually came to read it has now died - she is gone, gone, gone forever. The you that just read that sentence is also gone.

So I was grateful for this potent reminder that I had created for myself by getting on Dee's back. I smiled at the inevitability of the situation, and when we arrived at her field I slid down as carefully as I could. I still landed more heavily and from a greater distance than usual, so the walk back to the stable was a bit of a hobble, but I am still glad for the experience and my knee had recovered by the time we were ready to go home.
Posted by Nor’dzin at 21:44