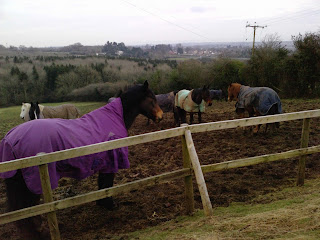 I have had a few wonderful visits with Dee over the last week.  One day I was going out to the field to get Dee and Nicky asked me to bring Red in as well to see the farrier.  I knew Red would follow us in, so I only took Dee's headcollar.  I still do not feel too confident about leading both my horses at the same time – they are so much bigger than me and I am not always confident of my footing with my dodgy knees!

I arrived at the second field and called them both.  Red defers to Dee, so she came to me first.  Usually I would put on her headcollar and then struggle to hold her and deal with the gate while I ushered Red through.  Because I inherited the notion of Dee being a difficult horse to manage when I bought her, I have always tended to feel I must make sure I have her fully under control.  I think this can make me tense and her naughty.  So this time I opened the gate and just let Dee wander through while I waited for Red.  The worst that could happen was that she was in the wrong field and wouldn't be caught.  When Red arrived I guided him through the gate and shut it.  My intention had been to then go and put on Dee's headcollar and lead her up to the yard, but she had already set out.  And so I had a lovely, relaxed walk up the field with Dee slightly ahead of me, occasionally stopping to look back and check we were still there, and Red walking right by my side – both happily going up to the yard of their own accord.  Magic!

Each time since then I have been letting Dee walk up to the yard on her own.  Today she was in what I call 'the wet field'.  It can be quite awkward getting them in from this field as there is a stream running through it which has formed a couple of deep trenches in the meadow.  If your horse comes to you by the car park, the only way to bring them in from there is to go all the way to the bottom of the field, across the stream and then back up – a steep and muddy walk.  Dee was at the bottom of the field.  She came to call, but stopped about 20 metres away, on the wrong side of one of the stream trenches.  I knew she could get across it and didn't fancy going down there to struggle in the mud.  She kept looking as I called, but didn't move and eventually turned her butt to me.  'Two can play that game,' I thought, and turned away from her and started to slowly walk back to the yard, still calling her.  Suddenly she remembered how to cross the trench, did so, and trotted up the slope to me.  Sensible mare – not to miss out on a feed for being stubborn.

I know she will not come to call so easily when the spring grass begins to grow – but I am enjoying it at the moment.  It is still very cold, so no riding yet.  I'm having fun looking for a saddle.  There are a few I like on ebay, but cannot decide whether to go for those or pay the extra £100 - £150 to get a brand new one.

The fields at Briwnant are starting to look rather well cropped, but both horses are looking a good weight – as good as they did last winter when they lived at Wyndham.  The livery care at Wyndham was excellent, and there the horses had hard feed twice a day.  I'm pleased that they are doing just as well at Briwnant on grass livery with hard feed less often.
Posted by Nor’dzin at 22:49 No comments:

We had a lovely visit to Briwnant yesterday.  Red was being used for a hack, so we met him half way down the field being led in.  He accepted treats and cuddles.  He looks really well and fit again.  Dee was also pleased to see us and happy to come in. 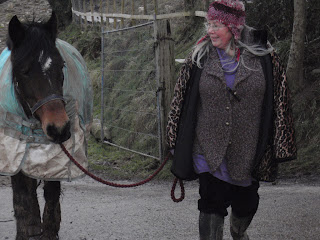 I was interested to read Victoria's recent post on Teachings of the Horse.  It made me think about how I approach Dee.  Because of her history as a 'difficult' or 'challenging' horse, I think I can tend to approach her with this in mind.  Having given myself permission not to ride for a while, I feel I have time to just enjoy being with her.  If she decides she doesn't want to come in, does it actually matter?  Well I guess it does from the perspective of having asked, one should follow through.  But does there need to be a time element?  Do I need to feel rushed?

With this in mind I asked Dee to accept her headcollar by holding it open and did not make any attempt to put it round her neck.  At first she turned away a little, but she wanted to stay with me.  After only a few minutes she gave me her head, placing her nose in the headcollar.  We then had a pleasant stroll up the field on a looped leadrope that was practically companion walking.

I was keen to get her rug off and see how she looked.  At around this same time two winters ago, after I had been away for a week and left her in the care of the livery owner, she was looking thin and scrawny.  I knew she would be fine – the care at Briwnant is first class, and I was correct.  She is a good weight and her coat has a lovely shine.  She has a slight sore spot on her chest where her under-rug has rubbed, but her proper winter turnout rug has been repaired now so I shall be able to put that back on her tomorrow.

Another blog I follow is the Carolyn Resnick blog.  Currently she is teaching her Uberstreichen exercises and I have been looking forward to trying them with Dee.  We tried the first one yesterday, and considering it was so busy at Briwnant with a lot of distractions, we made a good start.  I also hope to find time to work with Red with these exercises as well.

I think I mentioned in an earlier post that I am going to buy Dee a new saddle.  There are several reasons for this:
This saddle that I am going to replace has never been my favourite.  The previous Torsion that I had stolen from Wyndham was a beautiful saddle and is sorely missed.  If I still had that one I would probably be sticking with it, but I cannot afford to buy another like it.  Nicky is going to help me measure her up for a saddle and I'll let you know what I buy.  No excuses for not riding then!
Posted by Nor’dzin at 23:41 2 comments:

I'm feeling guilty that I have neglected my blog since November and completely failed to offer my readers Seasons Greetings.  I hope you had a lovely Christmas and belated Happy New Year wishes to you all.  I hope everything is going well for you.

It has been a busy time here in Wales and both horses have been ill.  I was also ill at the beginning of December, then we had a trip to Nepal, then Christmas happened and new year, then the weather got really wintery... so all in all life has been happening, but not blogging.

Dee had a snotty nose in December and a chill.  We kept her in for a few days and then brought her in just at night for a few more days and then she was fine.  Red's illness was a little more serious as he has had strangles.  He was confined to his stabe for about 6 weeks, and considering how much he hates being in the stable for a long time, he behaved very well.  The strangles abscess on his throat was huge and produced a bucket-load of pus when it burst.  The folk at Briwnant have been amazing and nursed him so well.  I am eternally grateful for their expertise and care.  In all I think it was five horses that had strangles, and they have all come through it with no long-term problems.  Red is still convalescing, being given extra feed to build up his strength again, but is back out with the herd now.  He has been declared fit by the vet.  He definitely wants to be out in the field and not kept in.  He looks fine and has only lost a little weight.

As Red is on full working livery at Briwnant he is groomed every day and fed as necessary, whereas Dee is just on grass livery.  So Dee tends to get more attention because she needs it.  Just after Christmas we went up to give Dee a feed and groom her, but as we led her in from the field Red followed us.  He didn't want to miss out on the family gathering.  If anything he is more affectionate since being ill and likes to come in as well for some TLC.

I have not been riding because the yard has been on quarantine and the fields were so wet, but I have decided I'm not going to ride until the weather gets warmer anyway.  I find that I get clumsy and tense in the cold and feel that I am a bit of a liability in the saddle.  I think I may not clip Dee next year and simply not ride for the coldest months of the year.  We have had such a lot of snow, that I have not been able to get my car up the lane to Briwnant.  I tried one day last week and nearly ended up in a hedge.  I miss seeing the horses but know they are well cared for and that Paul would let me know immediately if there was any problem with them.  If the snow continues till the weekend, we may try hiking over to see them.

The whole family went on the week's trip to Nepal which was wonderful.  Our sons liked it there and had a good time.  Straight after we returned home it was into Christmas preparations, and we had a lovely family Christmas.

A lot more snow arrived yesterday and more is forecast for Sunday.  It has thawed quite a lot today though, so hopefully it will go away for long enough that we shall be able to get up and see the horses.  We so rarely have snow in Cardiff that lasts for more than a day, that we are not really set up for coping with it.  It has not snowed like this here for nearly 30 years.  I think it is quite good to have a 'real' winter for a change though, and we are nice and snug in front of the wood stove.  I hope you are all snug and warm too.
Posted by Nor’dzin at 21:35 No comments: