Today has been quite a momentous day.  Firstly I completed and submitted my tax return this morning – always a daunting task.  It had taken pretty much all of yesterday and half of today to pull all the details together, but now it is done and off my mind. 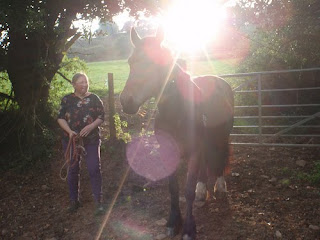 My reward to myself was to go to Briwnant and ride Dee.  I am trying to ride her more often and get her fit.  Now that Red is ridden regularly as a Briwnant Trekking Centre working horse, I do not have to worry if we can only ride him occasionally because he stays fit through his work for the centre.  Consequently I am concentrating more on Dee.  I have had very little time to work with her since we brought her back from Cornwall and am determined to rectify this.

As I walked down the first field to catch Dee I met Red walking up.  He wanted me to put the head collar I was carrying on him and seemed quite confused when I did not.  I think it is a real testament to how happy Red is with his life at Briwnant that he was walking up to the gate like this.  Paul had been down to catch a few horses ready for an afternoon lesson in the arena and also a few others for a trail ride.  Red was to be used for the trail ride.  Paul had just said to Red that he was wanted too and to come in, and Red had walked up to the yard completely on his own with no headcollar or anyone coercing him just from this.  What a good lad.

Dee was in the last field, as far away as possible from the yard!  I'm getting fit simply from walking out to get her!  It is uphill pretty much all the way back to the yard, so I sometimes find even this quite tiring even before grooming and riding.  Soon we were ready to go and today was the day I'd decided to take Dee out for a ride on her own.  Readers who have been following my blog for a while will know that Dee will not hack out on her own and naps badly.  However there is an idiosyncrasy to this behaviour of which I have become aware: that she will ride through fields but not along a track or road on her own.  When we were at Ridgeway, she would happily let me ride her around the fields on her own and even take the path across the field behind the stables, but she would not go down the lane.

One of the many advantages of Briwnant is that they have a lot of land, and there is a short ride I can take from the yard, up to the top fields and only finishing with a little bit of the track at the end.  I hoped that because most of it was across fields, and that she would know she was on her way home once we arrived at the track, that she would not nap.  It worked!  We did the whole ride with no napping – the first time we have sucessful hacked out alone on a complete ride since I have owned her.  I feel so proud of her and am absolutely thrilled.  It is only a short ride but includes a steep hill, so it does make her work.  I did not push my luck today and only asked her to walk the circuit, but I will add an extra field to it at the top as she gets used to it where we can have a trot or a canter.

Hopefully this is the beginning of a more satisfying riding experience for us both.  I do wonder whether the napping has something to do with the stoney tracks, and am considering shoeing her on her back feet as well to see if this makes her more relaxed and confident about the tracks.  On our Wenallt trail ride on Monday I was very aware of her hesitancy over the stoney parts of the track.  My only concern about shoeing her on the back feet is whether I would be equipping her with weapons!  Alternatively I could try hoof boots again – I don't think Dee would make the fuss Red made about having boots put on her feet.
Posted by Nor’dzin at 22:48 2 comments: Links to this post

Yesterday Dee was looking splendid and seems sound at last.  We both rode her a little in the arena and she was fine and seemed to enjoy herself.  I practised a few clover leaf patterns and transitions and she was responsive and relaxed.  This is a great relief.  The hoof that cracked is looking as good as it can until the new hoof grows through, and the hoof putty is staying in quite well now that they are in a drier pasture and the weather is also drier. 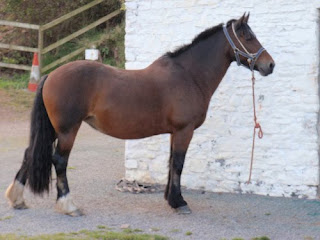 I'm a little embarrassed about her mane – or lack of it.  I always feel that cobs should be left to let their manes grow as long as they grow, but Dee's had become so uneven I decided to trim it all to the same length.  She'd had a bite or something half way down the top of her neck and had rubbed at it, so that she'd lost a chunk of mane there.  It is growing back well but it looked a mess with a long bit, then a short bit and then another long bit.  Now it looks odd rather than a mess... but it will grow again.

The second picture is somewhat historic.  My mother produced a camera that she had not touched for years but still had a film in it, so we got it developed for her.  This was one of two pictures on the film of Dee, me and my mother from 1995.  We still had Dee at Pontcanna Riding Stables at this time, but were getting rather fed up of the limitations of riding there, so we decided to take her out for the day.  This seemed reasonable at the time, but looking back it was a rather crazy idea and could have been disastrous.

We started very early on a Sunday morning so that the main road from the stables would be quiet.  The first problem was that she wouldn't cross this road.  We'd get half way across and then she wouldn't budge.  The only alternative was an underpass.  Having eventually convinced her that the white van in the supermarket car park was not a scary horse-eating monster, she surprisingly walked through the underpass as if she did it every day.  In the picture we are visiting my mother in Gabalfa Avenue where I had ridden Dee down the wide grassy bank in the centre of the road.  There were a few other scary moments during the expedition, but we got her back to her stable safely later that day.

It was an adventurous outing and perhaps we were foolish to attempt it, but it did convince us to move Dee from Pontcanna and this has been the best thing possible for Dee and for us.  If she was still liveried at Pontcanna she would have continued to be isolated in a stable for most of the time and on her own in a field for a few hours a day, whereas she now runs free with a herd of mares and geldings in 93 acres of beautiful pasture.  She would still have been spending most of her ridden time going round in circles in an arena, being agressive to the other horses and bored out of her mind, whereas now she finds occasional arena work interesting and most of her ridden work is out on the trail.  It was worth a risky ride to arrive at this point.

We are hoping to ride the Wenallt trail with Dee and Red tomorrow if I feel okay.  I have been very off balance and wobbly again today, so I hope it will be better tomorrow.
Posted by Nor’dzin at 00:28 No comments: Links to this post 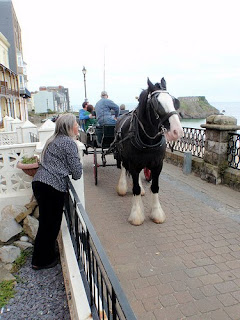 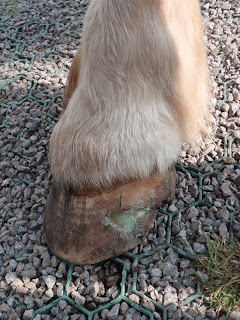 Well I still haven't ridden either of our horses since the fun ride, but I am feeling a lot better. We've just had a week's holiday in Dinbych-y-Pysgod (Tenby) in South Wales, and I really think I must have needed the holiday.  My dizziness and lack of balance gradually subsided over the course of the holiday and now is simply a mild occasional inconvenience.

We had a lovely relaxing week in an especially nice apartment with a sea view and a little patio garden to sit out in and enjoy the sunshine – yes we did have sunshine, a whole week of it.  An unexpected treat of staying in this apartment was that the route of the Tenby horse carriage rides passed right by our little garden.  So I got to stroke the soft nose of a shire horse every day and offer him an apple, to compensate for not seeing Dee and Red for a week.

Red is fine as always and now a firm favourite with the herd leader, Falcon.  Dee started to object to being in the convalescent field as soon as she started to feel better and began trying to kick through the fence, so they decided she was better off back with the main herd.  She is no longer lame, but still quite stiff in her hind quarters.  I think it is time to start exercising her a little now to try and loosen her up.  The farrier has had a look at the hoof which had cracked so badly and has tidied it up.  He is satisfied that it is coming along well.  I'm cleaning it out whenever I visit and patching it up with hoof putty.  This does not stay in from one visit to the next, but at least it gives the hoof a bit of support for a while and keeps it clean.  It has been quite dry here for a while now, so there is not a lot of mud around to get it really wet and dirty. 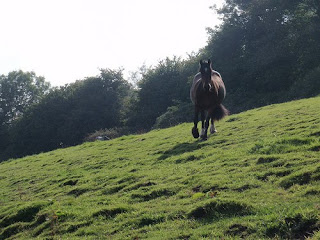 Having had a couple of incidents with Dee messing me around while leading her in from the field, I have been using the training halter and a lunge line when I catch her.  Simply using these is sufficient to ensure Dee's cooperation and we walk up together calmly and happily without me having to do anything else.  She's a sensible mare and knows when to give up on mischief.

Postscript: if Cilla of Frontshoesonly still reads my blog, will you please send me an invitation to your blog because I can no longer access it.
Posted by Nor’dzin at 22:37 1 comment: Links to this post