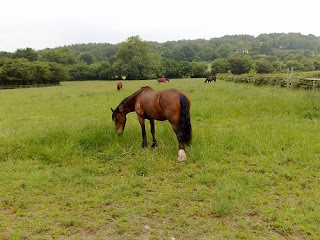 I recently visited Carolyn Resnick's blog and did her 'Quick Quiz'. One of the questions that interested me was "Does your horse help you by lowering his head and sticking his nose in the halter?" I realised that I did not know the answer to this question, because I had never approached haltering Dee from this point of view.

As a teenager, the first horse I worked with a great deal - outside of a riding stables environment - was difficult to catch. I discovered the way to succeed was to gently creep up towards him and when he showed signs of avoiding me, to turn away from him. Whiskey would then start to follow me and I could quickly get the halter rope round his neck. Looking back I now realise that he was actually joining up with me and deciding to allow me to catch him. He - and Sam, his elderly gelding companion - belonged to a lady who was the step mother of two girls who visited on alternate weekends. They often could not catch Whiskey and would phone for me to go down and catch him for them. I used to do this, but always felt I was betraying his trust a little.

Dee occasionally enjoys making Nor'dzin chase her round the field, but usually is quite happy to come to me. Yet I think I have always approached her with my habit of expecting her to be difficult to catch. I have not actually been dwelling in the as it is of catching Dee, but in the as I expect it to be. So since taking the quiz I have been holding out her halter - and her bridle - and have discovered that she does indeed lower her head and put her nose through the band. I ride her bitless, so putting a riding bridle on her is quite similar to putting on a leading halter. What a joyful discovery. I felt quite choked with emotion the first time I realised that she would do this for me. Such a simple act of openness on my part - requesting rather than taking charge - evoked such a trusting response from Dee. I now always do this and I am sure it is deepening our sense of communication.

I think Red is enjoying going out more often now that Jayne is looking after him. The only unfortunate aspect of the arrangement is that I usually arrive to look after Dee before Jayne is able to. Red does not understand why Dee is getting fed and taken out to her field, while he is left unfed in the stable. I always make a fuss of him, and give him a few carrots and some hay to ease his confusion, but of course I cannot give him his full feed in case Jayne wishes to ride him later. I hope he will gradually get used to the new arrangement.

I'm ending today's post with news of Wiimbledon. No not Wimbledon - Wiimbledon - a tennis tournament played on the Nintendo Wii console that is taking place in Cardiff on Sunday (29th June). Originally just our younger son was entering, but the organiser asked us if anyone else in the family would like to enter. It is the first tournament of its kind in the UK, as far as we know, so he is keen to have enough people taking part to launch it with a flourish. Consequently 'ö-Dzin had entered us all! So on Sunday some poor kid is going to be playing this old fogey at Wii tennis, and this old fogey will probably do hopelessly and embarrass herself! It is all for a good cause however. The prize is a trophy and a cheque for a charity. We are supporting our Buddhist charity and the Drala Jong Appeal. Please wish me luck!

Good Luck at the game, I'm sure you will do well and not embarrass yourself.
That is a nice realization you had about Dee. She must be a sweetheart and really love and trust you. My boy Erik always did the same for me.

I love reading about your relationship with Dee. She reminds me so much of my Silk. I do feel sorry for Red because I think that fairness is really important to animals and food is usually the most important thing in their world. I wonder if Jayne could work out a plan with you so you could give Red a little "snack" when you feed Dee and she would just give him a bit less. You could leave her a note telling her when you do it. When I leased my horse, we had a notebook and a pen hanging on a string attached outstide the stall to leave each other messages. It was quite helpful. Good luck with the tennis!

Yes, great idea, thank you Victoria. I had the same thought last night, so I talked to Jayne this evening and we've agreed that I'll give him a 'snack' when I feed Dee. Hopefully this will feel fairer for him.

I'm used to a barn where horses are all fed at different times, hence the usual banging on stable doors and so on. Since your horses are (presumably) on maintenance rations, one solution may be to feed them together in the morning or later in the evening.

I do think that we should be careful when ascribing human traits to horses. Is a horse "envious" of another's feed, or just demonstrating a normal equine interest in anything edible? Is he simply reacting because we have unknowingly trained him to expect feed in certain circumstances? Much as we like our horses, they have no reasoning ability, and simply react to stimuli (sometimes through learned behaviour, sometimes through raw instinct). Therefore I don't think that a horse can perceive "unfairness", only "reward" or "punishment" in direct response to an action (either of which may have been appropriate or not, depending on the handler's ability) and stimuli to which they have learned to respond. Of course each horse has a personality - they are not machines - however they don't have complex emotions such as we have. They can be very subtle mirrors, yet still it is because they respond to small stimuli that we might even miss. When we are spiritually balanced, we feel more atuned to our horses and they are happier around us because we send out overwhelmingly positive signals. Again, it is a matter of stimuli.