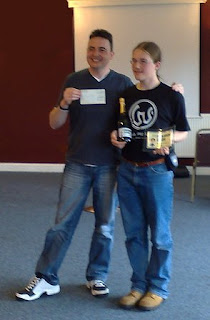 I hope you'll excuse me going off topic for this post - but we've just got back from the Wiimbledon tournament. I'm happy to be able to tell you that I did not disgrace myself, despite being the oldest competitor. In fact I made it to the quarter finals, and was knocked out of that by one of the finalists. The eventual winner was our son, Richard - mii name of Kiml. He proved to be as good a player as we thought he was - only dropping one set in the whole tournament. It has been a most enjoyable day. Here you can see him receiving his trophy, a cheque for our charity, and a bottle of champagne from the organiser.

So now after all the excitement, its time to go and see Dee, feed her, groom her, turn her out into her field, and muck out her stable. When we kept Dee at Wyndham previously, we used to have her on full livery and I only used to go up and ride or do some groundwork with her three or four times a week. Now that she is on part livery, I cannot imagine going back to full livery. It is so lovely to see her every day.
Posted by Nor’dzin at 16:06

Email ThisBlogThis!Share to TwitterShare to FacebookShare to Pinterest
Labels: Wiimbledon

I can't imagine not seeing my horses every day either.

Congratulation to your son and you too! Love my horses too, and interacting with them.