I'm feeling exhausted.  Last week we had a retreat at our home, which was delightful but retreats are always tiring.  It finished on Saturday and I have been out on a hack three times since then.  I rode Dee and Red on Sunday. So it is not surprising that I am feeling so tired. 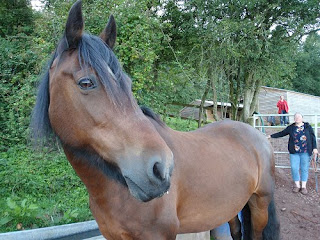 We are now into week four of the get-Dee-fit campaign, and there are signs of progress.  She is not puffing so much up the hills and not sweating up so much.  Also she has been a dream to catch the last couple of weeks, so she must be enjoying it.  She is still struggling with the stony parts of the Wenallt trail, so today I have ordered her some hoof boots.  I had to wait until today in order to get a hoof measurement straight after her having her feet trimmed by the farrier.

Dee had a lot of hoof attention today.  After being shod at the front and trimmed at the back, I cleaned the cracks with hibi scrub, applied hoof hardener, and then filled the parts that needed filling with hoof putty once her feet were dry.  Her hooves are gradually improving and the farrier is happy with them.  He says that her hooves are good and strong and this should only be a temporary problem.  His estimate of the timeframe to which her hoof problems relate, based on an average growth rate, does correlate with her move back from Cornwall.  So I think all this was due to that unsettling time and will indeed be a temporary glitch.  Her feet have always been healthy previously.

Tonight Dee is tucked up in Red's stable because it is worming time.  I'm sure she will not mind this for a night or two – especially as it is pouring with rain at the moment.

Dee has now been sound for five or six weeks.  I've been checking her back regularly as she is doing more work than she had done for quite a long time, and everything is fine.  No swelling, no pain.  I will never know for sure whether it was the Equissage massage equipment that brought on her lameness – it may have simply been coincidental.  I returned the equipment anyway and did receive a full refund.  So that is the end of that little saga.

On Monday I rode with Charlotte, one of the helpers at Briwnant.  She tells me that the horse I pictured in my last post Bareback Riding, 9th October, is not Molly, but Deanna.  Apologies to both mares!  Also my Beloved mentioned that I have not credited him for photographs recently... Practically every photograph used on my blog was taken by my husband, 'ö-Dzin Tridral.  He is becoming quite a skilled photographer and you can see a gallery of his work at Red Bubble and at Zazzle.  Lluniau Naturiol means 'Natural Pictures' which refers to the fact that he does not edit his photographs in any way – they either work or they don't.

Red is seeing the equine dentist on Friday.  It will be interesting to see how he feels about that.  No more riding now until Saturday, so my body has a couple of days to rest.
Posted by Nor’dzin at 23:40 No comments: Links to this post 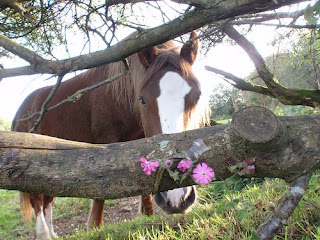 I've had a few nice rides on Dee since my last posting, and 'ö-Dzin and I rode out together with Red and Dee on Sunday.  It is ages since we rode out just the two of us on our horses, and it was great to be doing it again.  Red wasn't too keen on taking the lead at the end of the lane and took a few minutes of persuasion, but after getting past that he was fine and we had a lovely ride.

'Napping' must be a British term I think.  It means when a horse stops and refuses to go forward.  When Dee naps she starts to back up if I try to urge her to walk on, and this can be quite dangerous.  Sometimes she will back right to the edge of a ditch or bank.  She used to rear but doesn't do that with me any more.

I showed up at Briwnant this morning expecting to ride out with Nicky, but unfortunately she couldn't make it today.  All this week I've been painting the lounge in our home and I realised that I was physically really tired.  So I took Dee into the arena to play games.  We did some following me around, and circles stepping through with the hind leg, back up, and such like groundwork exercises.  I then decided that it might be nice to jump on her back after all, but didn't really want to fuss with lots of tack.  I just put on her bridle and got on her easily from the mounting block.

We did 20 minutes or so of patterns in the arena at walk and trot.  At first I felt really insecure – it is the first time I have ridden bareback since June 2008.  I know that because I blogged about it!  I soon started to feel more relaxed and confident and began doing a little trotting.  I was trying to engage in meditative riding – feeling the direction I wanted to move in from my navel, keeping myself centred, and trying to communicate through to Dee.  She is more receptive to this on one rein than on the other.  It is inspiring to ride with very little tack and simply endeavour to focus a connection through energy, intention and balance.  One day I will attempt this with just a neck rope.

In 2008 I had discovered that dismounting was a problem for my damaged knee – it cannot cope with the impact of me jumping down. Usually I slide off the saddle so there is no real jump down.  However in the arena I was able to dismount at the block so that there was no great distance for my descent, so that solved that problem.

I think Dee enjoyed being in the arena for a change.  She is quite relaxed and happy in there.  At Wyndham she was always tense and spooky in the arena, but at Briwnant she is chilled about everything.

Today's ride may not have contributed a great deal to the get-Dee-fit campaign, but it it was a good confidence boost with regard to my balance, and a good bonding experience for our relationship.

I think the inquisitive mare in the photograph is called Molly – one of Dee's Briwnant chums.
Posted by Nor’dzin at 00:28 No comments: Links to this post