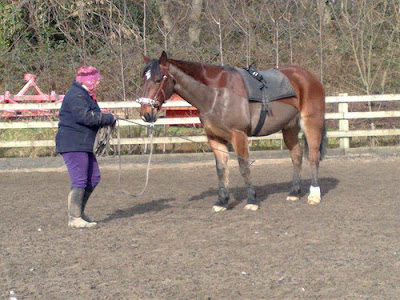 I've been working hard on websites and things over the last two weeks, and have not been finding time to blog. I'm pleased with the results of the work, however. I have a new Spacious Passion website that looks much more how I want it to look. The old site was powered by Joomla and I could never work out how to adjust the details of it, so I was never satisfied with it. The new site is powered by 'ö-Dzin's software to my design – it is great to have so much control.

Two weeks ago, Wyndham Livery was burgled and all the tack was stolen from the tack locker. This means I also haven't been able to ride, because I haven't had a full set of tack. Consequently I have been lunging Red rather than riding him. He's not been too impressed with this. It was a premeditated break in – they knew exactly what they needed to do to get at the tack, and sawed through metal gates and the door of the metal tack locker with an angle grinder. Needless to say, our insurance doesn't cover it.

We also played a game with him in the arena, based on an idea from Carolyn Resnick's blog. After lunging, we let him free. 'ö-Dzin stood at one side of the arena, and I stood the other side – both of us equipped with a bag of carrot treats. We called Red to us. When he came he got a piece of carrot – but only one piece. The other person then called him. If he wouldn't leave after his treat, we drove him away by waving a line. It took him a long time to get the idea, and even then didn't seem too sure. I don't think Red is very bright. We stopped on a success before he started to get either bored or frustrated.

We tried the game again the following day, however, and something had sunk in, because he got it right straight away. Unfortunately we were not able to carry on with him at liberty, because another horse was brought into the arena for lunging. This horse had been on box rest for a few days, so it went slightly beserk on the lunge line – galloping round and round with its tail up and snorting. Red got a little over excited, forgot to notice where I was, and almost trampled me. We decided to take him in.

Playing this arena game brought up a sharp yearning for Dee. She is such a quick and intelligent horse – she would have got the idea really quickly. I have been missing Dee a lot recently. I think when we first moved her to her retirement home in Cornwall, it was such a relief to be free of the anxiety and work of two horses that I did not feel the loss of her. Now that it is easier and less work, I've had time to let missing her arise. Hopefully, now the weather is warming up, we shall soon be able to reschedule our visit to see her. She will probably ignore me when we visit her, but at least I shall be able to see that she is well and happy.
Posted by Nor’dzin at 09:02

I'm so sorry to hear about the tack theft. The people who took the tack probably have no concept of how awful it is for the ones who lost it. What you say about Dee being quicker to learn than Red isn't surprising. Horses, just like people, have their own speeds of learning. I think that Red's ability to recall and respond the next day is a good sign. I remember how frustrating it was to have to share the arena when I boarded my horses. Just as I was getting somewhere, someone would usually show up and disrupt my concentration with my horse. Congratulations on your new website. I'm going to go check it out.