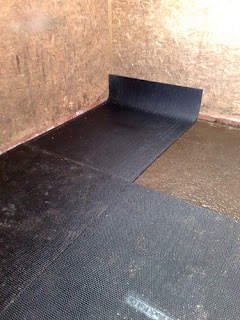 Last week was one of those weeks that seemed to be so busy that it flew by and I couldn't believe it was over already. Friday crept up on me so unexpectedly that I forgot to write up my feed and bedding needs for this week on the yard noticeboard. So blogging didn't happen last week in the midst of all this.

I've been exploring stable matting for a few weeks. It had become a little overwhelming - so many types of matting to choose from, and so many suppliers. I found a place only 20 miles away from home and decided to go and have a look at their mats last Thursday. I took my boys with me to help with navigation in case I got lost, and Mum came along for the ride. Mum is 92 on Saturday and still running her own home. She is an amazing lady and always happy to come out for a car ride.

The drive to the matting company was most pleasant, in beautiful sunshine through green and pleasant countryside for the most part. Unfortunately the mats the company produced turned out to be unsuitable to my way of thinking, even though they claimed that they regularly sold them as equine matting. I had a pretty clear idea of what I wanted to buy and how much I should expect to pay after receiving samples and quotations from a number of companies. When we got home I decided I'd had enough and had to just order some mats from somewhere. I started my search for suppliers again and this time discovered a supplier only 9 miles away that somehow had eluded me previously. I phoned up Green Oak Equine in Newport and felt satisfied that the mats they supplied were as good as any of the others of that type that I had found. By now I had mat-search lag and just wanted to get them as quickly as possible. Green Oak offered to deliver them the following day and for free because we were so local and on the way to a show he was attending. This was too good to miss. 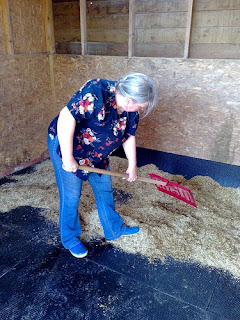 So on Friday morning 12 rubber mats were delivered. I helped him unload them off the trailer, leaving them outside our stables ready for laying in the evening. Poor Dee. This was too much for her - a large pile of scary black things appearing right outside her stable. She didn't dare put her head out of the stable door again that day.

It took us about an hour and a half to lay the mats after we had sorted out the horses for the evening. Dee was reluctant to come out of her stable with the evil mats sitting there right in front of her. But she was slowly coaxed to brave it, and with much snorting, wide eyes and pricked ears she did allow herself to be led out past them to be turned out in the field for the night.

Our sons, Daniel and Richard, came and helped with the task, having been tempted with the prospect of being bought a meal out after the work. The mats are heavy - about 45 kilos each - so it was quite hard work manoevering them into place. The supplier had suggested we did not cut them, but let them slope up the wall, so this is what we did, only cutting them in the corner to allow them to lie flat against the wall. We then put the bedding in and the stables were ready to receive the horses in the morning. The difference of feel underfoot was immediately noticeable and it is great to think of the horses being in more comfortable stables. They are not stabled too long in the summer - just during the day to keep them out of the flies - but in the winter they are in from dusk till morning, so the mats will be essential then.
Posted by Nor’dzin at 22:32