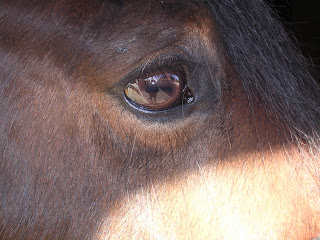 I arrived at the stables late morning to muck out. My timing was perfect - I got there just in time to help the yard owner catch Red who had managed to get his rug half off. He kept running away from her, but eventually came to me so that we could resit his rug. Dee and Red will be a field on their own for a few days near the other horses, before Dee is put with the mares and Red with the geldings.

Later in the day I returned to bring them in and feed them. Because Dee can be aggressive, and Red can be a bit pushy when being led - and also because I have a problem with my left shoulder at the moment - I have to lead them in one at a time. Dee was the first one to come to me, so I took her to her stable first. Red became quite distressed, racing round the field and calling continually. I went straight back out to get him and he was very happy to arrive at his stable next to Dee.

Now today I have had to make a blogger's decision - to tell the truth the whole truth and nothing but the truth, or to leave out less attractive facts. I have decided to go for warts and all - or in this case, lice and all. Yes Dee has lice. I am mortified that my poor mare is lousy, but it does explain why she is so itchy. I have treated her, her rugs and numnahs today and will do so again in a day or two. Once again I am having to kill poor wee beasties. Red does not seem to be infected, but I dusted his mane and the top of his tail as well, just in case.

I rode Red in the arena for a short while this evening. He was the liveliest I have ever know him to be since I bought him last October, but did not do anything too challenging. I just walked and trotted him a little. He did not like being apart from Dee again - even though he was only 50 yards away - and called to her in a most heart-rending manner, and I could hear her responding. I had not realised they had bonded so much. It is all very new to Red though, and I'm sure he will settle down pretty quickly. I just hope he will adjust to being separate from Dee when he is put out with the other geldings.
Posted by Nor’dzin at 21:48

Email ThisBlogThis!Share to TwitterShare to FacebookShare to Pinterest
Labels: lice

I am always very distressed when my horses call out to each other. It hurts my heart, even though I know that separating them is probably the best thing that I can do for them. Do you know about "Rescue Remedy"? It's a Bach flower essence that's available in most health food stores. I give a few drops to my horse - and to myself, under my tongue- in stressful situations. I put the horse's dose in hole cut in an apple or carrot - just a few drops - and it seems to help. It's good that you are spending more time with them now during this transition.

Thank you - yes I have heard of Rescue Remedy, but had not thought of it in this context.