As promised, here are a few photographs from the Briwnant fun ride on May 2nd.  I have been away on retreat (post about that on my Ngakma Nor'dzin blog tomorrow!) so I have not been able to post them earlier.  'ö-Dzin took the photos and found it a difficult task.  There are many pictures of 'horse's rear end after jumping' or 'horse approaching jump' but few that really caught the desired moment.  The delay of a digital camera can make timing almost impossible.

'ö-Dzin and I decided not to ride in the event this time.  Dee was not fit enough, we hadn't ridden much over the last few months, and Red can get a little over-excited.  We decided to help out as stewards (a slightly grand name for standing around in fields checking people are okay and putting fences back up when needed).

For the first hour we stayed with the experienced riders' group enjoying the cross country course in the Briwnant fields. We mostly helped put fences back up.  It was lovely to see Red enjoying himself in the capable hands of Jodi.  It looked as though he was calm and well-behaved - in fact the whole event was pretty calm and well organised.

Then the experienced group headed off for the trail part of their ride (over Caerphilly way I think) and the novices arrived at Briwnant having completed the Wenallt trail.  Some of them rode into the fields to try a few of the smaller cross country jumps.

Although these events are called 'fun rides' there always seem to be a few youngsters for whom they become something of an ordeal.  At the beginning of the ride I tried to reassure one nervous little girl by leading her around the arena a few times to give her a chance to settle into the saddle and relax.  When the novice group were trying the jumps I stayed with a couple of riders who had stayed behind the main group to try jumping without the excitement of the larger group.  They did not really need any help but I felt it was better that they had someone with them just in case.  After this I returned to the rest of the novice group and found a young girl crying because her pony kept running away with her.  I started to lead her back to the yard and then another helper took her the rest of the way.  After a bit more jumping everyone began to head back to the yard for refreshments. 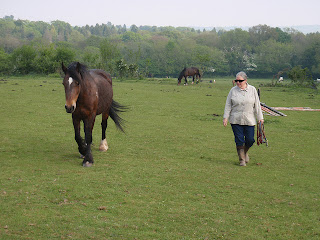 When we visited Dee at the beginning of last week I was a bit worried about her.  She was looking a good weight but her summer coat was not coming through very well.  She had a few bald and scabby patches and generally looked a bit of a mess.  We gave her a thorough groom and I rubbed some herbal balm into the bare patches.  Sarian suggested we give her a bath.

On Thursday I bought some tea tree oil soap and we went up to Briwnant on Friday to give her a bath.  The difference in Dee in just a few days was remarkable.  She no longer had bare patches.  Although her coat is still a not-very-pretty mixture of coarse winter coat and finer summer coat she is clearly feeling well.  Walking up to the yard from the field at liberty she was playful, trotting after 'ö-Dzin when he ran ahead to try to get a photo of her, and getting behind me and nudging if she thought I was being too slow.  It was lovely to see her feeling energetic and strong again after the stamina-sapping winter. 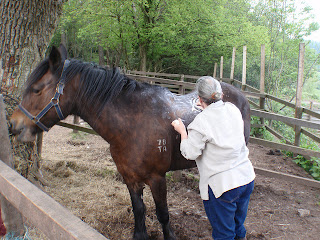 I don't usually hold with horses being bathed – especially horses that live at pasture.  I feel they need the natural oils in their skin.  I do not use shampoo on my hair—haven't done so for many years—so why would I want to use such products on my horse.  I did make an exception this time however, as she is clearly itchy and uncomfortable.  So we gave her a bath and another thorough groom.  As usual she behaved perfectly while we bathed her – she is always so to easy to handle to do anything like this.  I didn't tie her up while we did it, but just left her head collar on in case I needed to grab her for control.  The only thing that disturbed her was when the goats escaped – they have four at Briwnant.  I don't think Dee had seen a goat before.  She snorted and became quite agitated if they came near her.

When we took Dee back to the field she trotted away – again a sign that she is feeling good.  She then—of course—had a good roll in the dirt!

Briwnant has been preparing for today's fun ride all week and putting horses over the cross country course, including Red.  More about the fun ride and photos soon.  Nicki told me that Dee has been jumping the jumps that are in her grazing pasture, just for the fun of it.  That mare does love jumping!