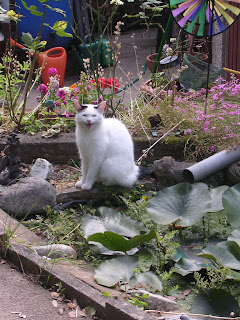 I find myself still feeling quite distressed at the demise of the guinea pig. Why is that? Why do I dwell on his final, painful day as a memory, rather than on his whole lifetime of happy memories? There is a guinea pig shaped hole in my life, and that hole—that emptiness— is uncomfortable. Emptiness is uncomfortable. There is nothing we can do with emptiness except let it be as it is. We find it preferable to indulge the memories around the hole because we can do something with them – they have a form that can be manipulated, felt, potentised. I hurt, therefore I am.

Memory: in the winter we would bring the guinea pig into the house when it was too cold for him to live outside. Every time I opened the fridge he would squeak at me, because he knew there was food in the fridge.

Perhaps you are thinking that I should ‘get a grip’. He was only a little guinea pig, called Tsi-tsi Pagpo (Mouse-pig) – not a significant existence in the great scheme of things. Yet my response to his loss and my indulgence in the memory of his final hours is an example of how we live our whole lives, clinging to the form of them and trying to ignore the emptiness of them. When emptiness arises we try to fill that hole as quickly as possible with a new form. I am finding it useful to meditate on the free-fall of my habitual indulgence in avoiding emptiness that is still potent despite having been a meditation practitioner for over 25 years.

Memory: occasionally the guinea pig would escape his run in the garden because it had been placed on an uneven patch of grass. One of the cats would come into the house and meow at us until we took notice. We would then find the other cat sitting next to Tsi-tsi Pagpo, keeping guard, until we came to return him to the safety of the run. Both cats seemed to understand that the guinea pig was part of the family, and not food, and he seemed to know that they were not a threat to him.

Writing this post is my final indulgence in feeling the edges around the hole of our guinea pig’s loss. I will allow myself to become comfortable with the reality of the emptiness of the guinea pig shaped hole in my life. I will not mourn a projected future that included him, but has never existed. I will not dwell on a remembered past that is no more. If happy memories of him arise, I will enjoy them and then let them dissolve. When thoughts of the pain of his final hours arise, I will feel sorry for them, and then let them dissolve.

I wish I had a photograph of him to put up with this post, but find that I do not. I thought I might put up a picture of my purple toe, but then decided you probably didn’t want to see that. So here is a picture of one of Tsi-tsi Pagpo’s feline guardian angels instead.
Posted by Nor’dzin at 08:36

Email ThisBlogThis!Share to TwitterShare to FacebookShare to Pinterest
Labels: death, emptiness and form

So sorry for the loss of your beloved guinea pig.......Any animal can touch our hearts. :)

oh Nor'dzin! how sad to lose your guinea pig. but you have your memories and that can be a comfort.
i lost my first dog four years ago, the pain has gone and i still have memories to help me feel he is still with me even if in spirit only.

Very beautifully written post. It's not the size of the loved one that determines the immensity of the loss.

I'm sorry for your loss of your little friend - He sounds like he had a wonderful life. How amazing that the cats took care of him. My cats are in full mouse hunting frenzy as the weather cools down and the little creatures try to come inside where it's warm. It makes me so sad when they catch one. All creatures, small or large, deserve a chance to live their lives as safely and happily and long as they can.

There are so many opportunities in life for us to go deeper and find a new level of stillness and acceptance. Thank you for sharing your process about form and emptiness. I, too, want so quickly to fill the emptiness with something familiar. Lately sugar has been the 'something familiar', offering some misconstrued comfort to tide me over between periods of allowing the experience of emptiness. I am reminded of the saying: This too shall pass. As indeed it will...