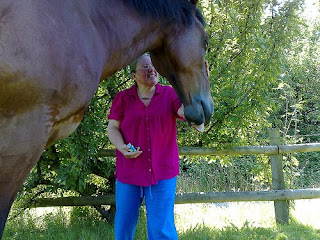 It’s been a busy week and I’ve been feeling pretty tired, so I have not done as much with the horses this week as I had hoped. I lunged Red on Tuesday. He was pretty good, except for when one of the stable hands went past the arena leading a horse for turnout. Then he completely forgot I was there. I had to walk him in circles until he stopped neighing and settled down again. He’s dangerous when I lose his attention that totally – he doesn’t notice where I am and I could easily get barged while he is so agitated.

He was also good in the stable letting me pick his feet easily, but the next day he wouldn’t let me near his feet at all. I’d taken Dee down to her field first – well it was her turn – and so he was all roused up to be turned out. He is such an impatient horse. When I take him out first, Dee just waits quietly until it is her turn. But Red paces around the stable, kicks the door and neighs continually.

This morning I rode Dee and practised the ‘work at the happy end of the arena, rest at the spooky end’ routine, which again worked like a charm. She’ also getting very good at neck reining. I hardly have to give her any cues to turn, and to halt, although she still takes a bit of coaxing to back up for me.

I feel a bit of traitor to the barefoot cause today because I’ve had Red shod on his front feet. I would have loved to have succeeded with the Boa boots, but Red isn’t the right temperament for putting something like that on his feet without intensive, committed perseverance, and unfortunately I’m not in a position to be able to give it that. The boots are great – it’s Red that’s the problem. Though to be fair to him, his feet are unusually wide, which means the boots do not slip on as easily as they would on a more usual hoof that is longer than it is wide. At least now getting Red ready can return to being a calm and easy task.

The website I would like to mention is that of the Peace Mala organisation. This charity was founded by a Welsh woman, Pam Evans, to promote tolerance, respect and understanding among people of all races and religions. I was invited to attend their youth awards ceremony last week as a representative of my Buddhist Lineage. It was a delightful event and I think Pam is a remarkable woman. I particularly enjoyed the Nepalese children’s dance.
Posted by Nor’dzin at 20:30

I hope you don't spend too much time worrying about the barefoot cause. I'm no longer a fanatic, and do keep my horses barefoot, but if it greatly interfered with my enjoyment of having any horse, I would do what I had to do. Maybe some day your life will be such that you will find out how to help Red change his mind about folks handling his feet. Meanwhile, there surely are a bounty of other challenges!

Thank you LJB. Indeed it is important to enjoy our horses - heavens knows they cost us enough! I am looking forward to getting ready for a hack quickly and easily tomorrow morning. Weather forecast is good as well.