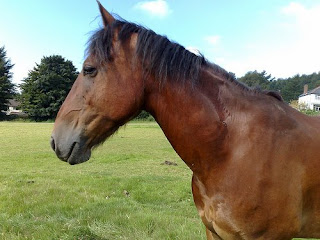 I started this post on Tuesday but then my computer crashed. Turns out it is only a problem with the power lead, so I can use my computer as long as I don’t move it until the new power lead arrives. Thank heavens blogspot autosaves.

Wyndham Livery has just changed over to their winter routine. This means that the horses are in during the night and out during the day. I have decided to change over with them, so I am now going up to the stables in the morning rather than in the afternoon. This seems to be working very well. Although it is a bit of a struggle for me getting out of the house so early, I find that once I get there I have more energy that I used to have going up in the afternoons. Consequently since we returned from our holiday, we have ridden out together (Sunday morning), I’ve lunged Red twice (Monday and today), and ridden Dee in the arena (Tuesday). The new arrangement means ’ö-Dzin will only see the horses at the weekend and I have to do everything for the horses on my own weekdays, but it was going to become increasingly difficult dealing with the horses in the evening as the nights draw in. Also there will be few evenings left now when it is still light enough to ride out in the evening at the time ’ö-Dzin could get there from work.

Red was really hard work to lunge on Monday. He wouldn’t listen to me and stopped everytime he found himself near the gate. I had to really get on his case, cracking the lunge whip behind him and and placing my body in a position to push him on. Afterwards I did some walking and stopping, and backing. Back at his stable, I picked out his feet and took him out to the field after his feed. As he is on full livery I am not obliged to pick out his feet, feed him or turn him out, but I like to have as much contact with him as possible whilst still having enough energy left to give to Dee. I've tended to avoid turning him out and have left it to the livery staff to do, but felt this was not helping our relationship improve.

Lunging Red this morning was quite different – loads better. He was listening to me more and I was keeping his attention. I had to be a lot less firm with him and was able to give a lot more praise. Leading, stopping and backing after the lunging was all easy. I was so proud of him. Back at the stable he was less pushy and didn’t try to bite me, and I felt relaxed and confident taking him out to his field. I so hope this is the turning point for us and we can start to get along well without him pushing me around and intimidating me, so I don’t have to be so tough with him.

I got on well riding Dee in the arena on Tuesday and am looking forward to riding her tomorrow. I tried a suggestion from Carolyn Resnick’s blog. This was to work her quite hard in the part of the arena in which she feels confident, and use the scary, spooky part for relaxing time. So after a little warming up time where as usual she refused to go down to the spooky end of the arena, I made her trot and trot in the upper end. After three rounds of trot at the upper end, I asked for walk as we approached the scary end and loosened the rein. She lowered her head and walked around the bottom of the arena. I did this four times, twice on each rein, and sure enough she happily went right into the bottom end of the arena without any hesitation because she knew that this meant relaxing time. Amazing and so simple! I’ll do this again with her tomorrow and hopefully this will be an end of silliness about the far end of the arena. If she does start spooking and refusing to go there again, I now have a technique to work with it. Thank you Carolyn.

Dee was also really good on our ride on Sunday. I wondered whether a bit more roadwork occasionally, when we are with bombproof Red, would build up her confidence about walking up the road, with the aim of increasing the possibility of taking her out on her own. So we rode a circular route, through the Wenallt, across the stream and out onto the road by Rhiwbina Farm, and then down the road home. This route involved going over two motorway bridges and a fairly busy road for a short distance. Dee is not bothered by traffic – it is all the odd things in people’s gardens, drain grids, roadwork cones and things like that which frighten her. She took it all in her stride with Red with her. Occasionally something made her snort and swing out a little, but that was all.

I am so delighted with my horses this week – and with myself! I hope things continue to go so well and that the wonderful September sunshine continues till the end of the month.
Posted by Nor’dzin at 16:37