These boots are made for walking

This evening Red had his first outing in his new hoof boots. He was pretty good as we put them on and didn’t seem at all perturbed. I let him have a good look at them first and let him hear the click click noise that the dial makes as you tighten them. They were easy to put on, though he was not too keen on keeping his left foot still while I tightened the boot up.

We set off down the lane. As we reached the end of the tarmac part and moved onto the rough, stony track he became reluctant and started to move more gingerly, but then he gradually relaxed and started to stride out more purposefully once he realised that his feet were not going to feel every stone. He hesitated in the same way at the entrance to the horse trail, and once again at the stony track on the way home. But he realised he was comfortable more quickly each time. He was definitely much happier and more sure footed throughout the ride, and I don’t think it will take many outings before he starts to look forward to having his boots put on. 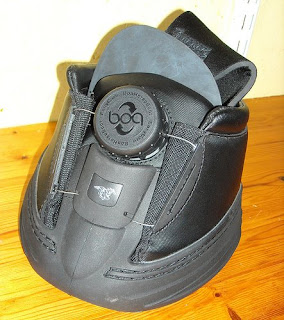 Dee seems to have made a friend of J’s new mare. When ’ö-Dzin turned her out Indi whinnied and trotted straight down to Dee. Dee was happy to share the same patch of grass with her and they even engaged in some mutual grooming. This is so delightful and such a change from the mare who would not allow other horses near her.
Posted by Nor’dzin at 22:44

they look like the most amazing trainers but for horses. how cool. glad red is feeling comfortable in them already.

I'll be interested in seeing how the boots work out over time. I want to buy some, but people keep discouraging me from doing so. My farrier says he rides with some people who use boots, and they have to keep stopping during the trail ride because the boots fall off. It could just be because they didn't size them correctly. Let me know how they work out as you use them in the future.