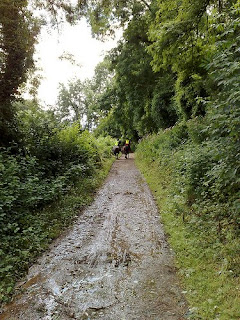 We’ve had an interesting and eventful day. We went to the stables quite early to ride. Everything went well until we came to put on Red’s Boa boots. He refused to co-operate and it took us ages to get them on his feet. Once they were on he was absolutely fine and we were able to set out. Surprisingly Dee took the lead and strode out at a good pace. She continued in this confident manner at the lead, right down the track, up the road, and into Wenallt Wood. Extraordinary!

Both horses were quite lively – and then we found out why as we heard the sound of a hunting horn. The killing of foxes by hunting with dogs is now illegal in the UK, but several local hunts still ride out with dogs following a scent trail. Dee and Red must have been aware of the hunt a long time before we heard the first sound of the hunting horn. To add to their liveliness, we encountered a dog that thought it amusing to snap at Red’s heels. Red bucked a little kicking out at the dog, but fortunately it then ran off, back to the owner who was not keeping it under control. It was a good job it didn’t snap at Dee as I’m sure she would have really kicked it.

We had nearly got to the point where we intended to turn round, when it became clear that the hunt was getting nearer. We did not particularly want to get caught up with a bunch of unknown and excited horses so we decided to head back. We usually trot a few times on the way back, but at the first trot Red – now in front – decided that a canter would be more enjoyable. ’ö-Dzin is still not very confident about cantering in the Wenallt because the trail is rather twisting and there are quite a number of low overhanding branches. I followed calling out to him reminders for how to bring Red back to a slower pace, but realised that my speed was spuring Red on rather than helping, so I slowed Dee to a walk. ’ö-Dzin then quickly brought Red under control and he settled back to a walk. We had a couple of other impromptu canters on the way home when the hunting horn sounded again, but had no trouble slowing them both. This is invaluable experience for ’ö-Dzin and has increased his confidence considerably. It was rather enjoyable to be riding such lively mounts, but we would not wish it for every ride.

Back at the yard, we had almost as much trouble getting the Boa boots off Red’s feet as we had done getting them on him, and sadly we have decided we’ll have to give up on having Red barefoot. With limited time it is no good spending a third of our riding time getting the boots on and off. If we had our own land, a round pen, and the unlimited opportunity to work with Red as much as possible, I would persevere with teaching him to accept having the boots put on. But at livery it is difficult to work with a horse intensely and exactly how one would want to. He is not a horse that is naturally co-operative. I would have lunged him today and alternated working him with trying to put the boots on, over and over, until having the boots on seemed like the preferable option, but the arena was not available as someone was having a lesson. I suppose we could have taken him out without the boots, but this would have felt unkind as he had definitely become a little footsore on our stony tracks while he was on loan. We could have given in and not ridden this morning, but that would not have left a very useful imprint on Red. Not being land owners there are always compromises that we have to make in the routine of our horses’ care. Wyndham Livery offers the best we can expect of a livery yard. I think it will be better for us and for Red that we can get ready quickly, quietly and calmly when going for a ride, rather than having a big battle. So although ideally I would like to keep him barefoot, pragmatically it is better for us all if he is shod on his front feet. He is due to see the farrier on Thursday.

The rest of the day has been spent in preparations for our sons moving into their Halls of Residence tomorrow. Life is going to be very different for us all after tomorrow.
Posted by Nor’dzin at 19:44