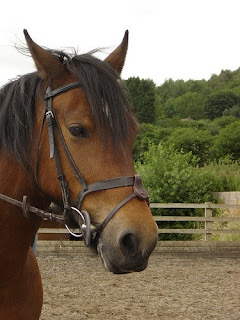 We had a lovely ride in Coed y Wenallt on Monday evening. The weather has been dry and sunny - most unusual for Wales - and we have been making the most of it. Over the weekend we had to mend the roof of the loggia that got badly damaged in a storm last month. This was our first free - and dry - weekend since then, so we had to prioritise this repair. Consequently riding was not possible over the weekend, just daily visits to care for the horses.

'ö-Dzin is not a very experienced rider, but he makes up for this in courage and a natural ability. However we have been having problems with saddles with Red ever since we bought him last October. He is round like a barrel and saddles just slide round him. I suffered a bad knee injury the week we bought him coming off him after a saddle slip, and 'ö-Dzin has come off twice for the same reason. We've tried all sorts of saddles and eventually found that a treeless saddle seemed to give the best fit. When all our tack was stolen in January, we decided to bite the bullet and replace our saddles with two Torsions. We bought a beautiful leather one and an almost-as-beautiful synthetic one. We had been putting the leather one on Dee and the synthetic one on Red, but 'ö-Dzin had still been feeling that the saddle was slipping a little - not so badly that he thought he would come off, but enough that it was making him nervous of cantering through the curvy track in the wood.

On Monday we decided to try swapping the saddles. Red had the leather Torsion with the Equitex numnah. I put the synthetic saddle on Dee with our other treeless saddle numnah. This numnah came with rather hard foam inserts that I have replaced with the wadding out of an old pillow, to make a lovely thick pad. 'ö-Dzin found he felt much more secure in the leather saddle and quickly relaxed into believing that it was not going to slip. Dee seemed very comfortable in the synthetic saddle, and although it did not feel as well balanced as the leather one, I did not feel insecure. Consequently we had a couple of short but enjoyable canters in the wood.

I have become a great fan of 'going treeless' from my experience with these saddles. Both horses seem more relaxed and rounded in them, and I'm sure they improve my riding position. In fact I am gradually moving towards more and more 'natural horsemanship' style tack. Dee used to resist the bit, putting her head up and becoming quite difficult to manage. Eventually I found a drop noseband (as shown in the photograph) prevented the problem, but I disliked restricting her in this way. I felt that the way she opened her mouth immediately after I undid the noseband and moved her jaw, indicated that she had felt constricted. In the spirit of 'less is more' and believing that Dee was willing but uncomfortable, I tried her in a bitless bridle, an English hackamore. She has behaved quite differently since I have used this - calmer and more responsive to the lightest of contact. We had moved on to Dr Cook's style cross-under bitless bridles, but unfortunately these were lost in the burglary as well, and we have not managed to afford to replace these as yet. I had ridden Red a couple of times in one of these bridles before their theft and think he will do well in one as well when we eventually replace them.

I think it always has to be remembered that we control our horses through their co-operation, not through our domination. I feel that tack should be as minimal and as comfortable as possible to achieve the union of horse and rider.
Posted by Nor’dzin at 22:43

I'm glad to learn that you like the treeless saddles. I am saving to buy one for Siete. What kind of pad are you using? That might also cause the saddle to slip. There's a strange looking pad made by Dixie Midnight that is very breathable, helps the horse when he sweats and is supposed to keep the saddle from slipping. It can be cut to fit under your regular pad and saddle. I imagine someone has made a British version of it too. If a horse has comfortable, properly fitting tack, it makes such a big difference.

Thank you for an interesting post. Certainly, well rounded horses seem to be the best adapted for treeless saddles. I wouldn't like to try a treeless saddle on a horse with high withers. It may also be worth monitoring the saddle stuffing for changing shape over time.

I too believe in using as little tack as possible. In the mountains, that can still mean a breastplate and crupper. (Incidentally, these items can help reduce sideways saddle slipping too.) However there is also a basic minimum of tack for each horse, even on flat ground. In the case of my stallion, that includes a tie-down so that he can't evade the bit by raising his head excessively. (Emphasis is on "excessively", as he isn't restricted during normal movement.) I prefer a tie-down to a noseband or martingale, as it doesn't act on the mouth. To my way of thinking, this isn't controlling the horse through domination, however it is setting some ground rules such as not evading a properly fitted bit. My side of the bargain is to ride with a gentle hand always.

I think that a woollen or felt saddlepad may help reduce slipping too. Putting natural fibre onto natural coat is always good. I use a thick woollen blanket folded into six layers - thick enough, soft, and easy to wash and dry.