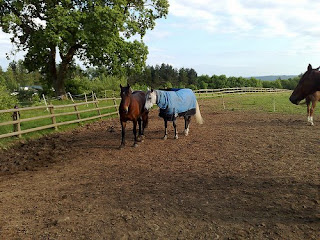 We rode in the arena together last night for the first time. My memories of the arena at Wyndham are not all happy ones - Dee could be quite crazy in there and has thrown me a few times. However I felt sure that Red would give her confidence, and she is generally a much calmer horse since she's been back in a herd.

Being careful to relax and think positively about the arena, I took Dee in and we rode them around for a while to warm them up. Dee tensed up, looking at the motorway - which is much more clearly visible from the arena - but I talked to her quietly, telling her that Red was with her and that it would all be fine, and she settled down.

This is the first time we've had access to an arena since we had two horses, and we decided to have some fun, rather than ask the horses to really work. We played some riding in formation games - sometimes having the horses beside each other, sometimes pacing each other at opposite sides of the arena, and making patterns with our path around the arena. As Dee is quite a bit smaller than Red, their paces are not the same, so it was a challenge to keep them in line with each other. We didn't succeed a lot of the time; but what did it matter - we were enjoying ourselves. Red liked having Dee there, and Dee was quite happy to ride beside him. It is extraordinary to think that this sort of riding would have been completely impossible with Dee a couple of years ago - she was just too aggressive.

We tried our formation patterns at the walk and at the trot. 'ö-Dzin is still a novice rider and not too sure of the proper leg aids to ask for direction, and bend, and things like that. He found it really good to have something other than his riding to concentrate upon. He found that in focusing on looking out in order to be in the right place at the right time and watching me and Dee, he relaxed in his riding and naturally asked Red for the correct direction without thinking about it. So often if we let go of ourselves as a central focus, we are able to relax and have a more open view. It is easy to forget that our bodies communicate continually to everyone and everything. Our intention manifests in our body language, tone of voice and the look in our eye. Horses are particularly sensitive to this - so if we think of where we want to go they will often oblige.

It is now two weeks since we moved the horses, and we are already discovering the benefits of the new yard. We rode together three times last week, and this should continue to be possible throughout the summer. This is what we had hoped for, and we are so delighted that it is working out. Red is starting to really feel like 'ö-Dzin's horse. This is great because it stops me feeling pressurised with the responsibility of two horses, and makes 'ö-Dzin feel much more involved. The horses are now something we share every day, rather than for one day at the weekend. We have fine tuned our stable management to an efficient operation so that we can sort out the horses in the evening within an hour, so there is regularly time to ride as well. It is so enjoyable seeing the horses everyday and spending this time with them together.

Red seems to have made a friend among the geldings. He clearly still likes to spend time with Dee, but it is good to know he has a chum. He is a friendly sort of chap.
Posted by Nor’dzin at 12:12

I'm so glad that things are working out well for you and the horses at the new barn. Your riding in formation sounds like fun. When I ride in the arena, I usually try to have a "destination" that I can look ahead to between my horse's ears. I think it helps the horse feel reassured that you know where you're going and you will lead him there. The formation riding will do that too.