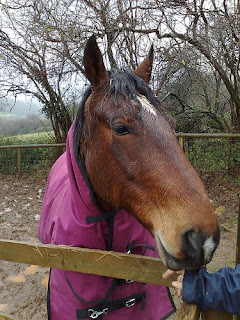 He is a kind and gentle fellow who does not realise how big and powerful he is. When we first bought him he was quite pushy and we have had to gently teach him a little respect. He is a willing learner. At first it was quite dangerous being in the stable with him - he had no awareness of where you were - but he has gradually improved through simple measures, such as insisting he steps back before setting his feed down for him to eat.

In some ways he seems quite daft - leading him through a gate smoothly can be quite a challenge - but then he also shows great intelligence at times. He is a communicative horse. He whinnies when he sees me or 'ö-Dzin (my husband) and will come to call. When I ride him out alone he frequently calls to the other horses, until the point on the ride he recognises as being homeward, and then he stops neighing.

I am quite proud of myself in finding Red. I had asked our yard's owner to act as our agent to look for another horse, as I felt I lacked experience. But I found Red, rode him the first time on my own, and decided he was a good horse. Then the yard owner came with me to check him out, and agreed he was a good horse. He shook his head a lot when we tried him out for the second time, but decided it was simply a habit. I asked them why he was ridden in a martingale and was told that it was 'because they look nice'. When I took the martingale off, he stopped shaking his head. I have not developed such a strong bond with Red as I have with Dee as yet - even though he is friendlier and more communicative than Dee - but I am becoming fond of him.

We were away for 10 days last week, teaching Buddhism in Germany, and I was a little horrified to see that Red had lost quite a lot of condition in that time. Usually I give him a few hard feeds a week so that he is not relying only on hay, but he did not get these while I was away. He also managed to keep losing his rug, so the yard owner had kindly put one on him for me. When I brought him up for a feed on Monday, he kept looking at me and then nudging his stable rug - I think he had been cold. I decided to keep him in that night, in a warm rug with plenty of bedding, and give him a good feed and two hay nets. He looked much better yesterday morning and indicated that he wanted to go out by ignoring his hay and kicking the stable door. I put an extra under-rug on him before I turned him out. Although it is quite warm when the sun shines during the day, it is still cold at night.

Red has lost a lot of condition over the winter. Despite his size, he is not a brave horse in the herd and lets all the mares boss him around. Consequently I do not think he has been having as much of the hay as he's needed of that given them in the field. Being at Ridgeway has been wonderful for Dee - she has been reintegrated into a herd and had time to recuperate, but I think it does not suit Red so well. Although we love this wonderful, peaceful hillside, we have decided to move both horses back to Wyndham, our previous yard. Wyndham is not so beautiful as Rideway, and is rather too close to the motorway, but it is much easier to get to and there are always people around doing things with their horses. Ridgeway is near the top of Caerphilly mountain and access is via a steep dirt track nearly a mile long. It can feel very isolated and I find I do not ride as often as I did at Wyndham. It also means that 'ö-Dzin can only get up there at the weekend, whereas he will be able to join me for a ride after work at Wyndham. Also Red will get a feed morning and evening and live in overnight in the winter at Wyndham, which I think will suit him better. I believe he has been used to a little pampering and has found it hard to live out through the winter. Dee loves it, but she is a much hardier breed.

Tomorrow we are hiring a van to move our cupboards and things, and then Friday evening we shall ride them down to Wyndham. It will be interesting to see how Dee reacts to being back there. She was not unhappy at Wyndham, but often very nervous. She will not be kept in a field on her own this time however, as she has proved herself as safe in a herd, and I believe it was this isolation that contributed to her edginess. I am excited about the move, as I am expecting to ride a lot more often - although I am not especially looking forward to having to muck out two stables every day!
Posted by Nor’dzin at 12:27

Email ThisBlogThis!Share to TwitterShare to FacebookShare to Pinterest
Labels: Red