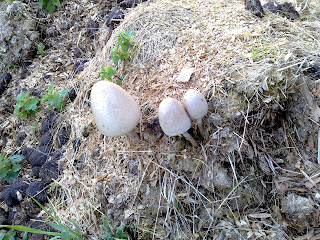 Yesterday was tiring but enjoyable. I went up to Ridgeway in the afternoon, cleared out the last of our things, and prepared the horses for the ride to their new home. I'm sure I removed half a horse's worth of hair from Dee! It was incredible. Unfortunately it was drizzling while I was up there, so I had to groom them in the stable - not ideal at this time of year and I feel as though I have inhaled a lot of dust and hair. Having delivered the last few things to Wyndham I returned home for a five minute break before it was time to go back up to the horses to ride them to their new home.

A friend kindly drove us and our tack up to Ridgeway. We tacked up Dee and Red, swept out the stables as best we could and then set off. The rain had stopped and it was a pleasant, warm evening. It must have been after 6 pm when we were finally ready to set off. The woodland wildlife was busy with their evening routines and the midgets were out. The low sun gave the new spring leaves an almost florescent glow, and the slopes of the wood had a hazy carpet of bluebells. The birds and squirrels were busy in particular, and the birdsong was delightful. Fortunately the midgets were only a problem at the beginning of the ride and we were mostly untroubled by them.

Red set off at an unusually good pace down the track. They usually dislike this steep track from the stables, with its loose stones and uneven surface, and plod along it slowly, needing encouragement all the way. But yesterday evening they seemed to understand that something new was happening, and they were both eager to walk at a brisk pace. We decided to only walk them all the way as neither of them are fit at the moment, and it would be the longest ride they had done for quite a while.

After the track, we rode through the Ganol - one of my favourite parts of woodland in this area north of Cardiff. It has a particularly peaceful atmosphere and feels really old. It also has a nice wide track through it where we can ride side by side. At the end of the Ganol we had to turn right to go down the road to Coed y Wenallt (Wenallt Wood or White Wood). Often at this point the horses have a moment of reluctance to turn right, because they know that the quickest way home is to the left. However last night they rode on happily, with Dee merely glancing back. After a short distance on the road we turned into the track down to the stream in Coed y Wenallt. Red seemed a little uncertain about stepping through the horse gate, so Dee took the lead. It is a strange thing with Dee that she will not go out on her own, yet once were are actually out on a ride she often likes to take the lead. She led from this point for the rest of the ride.

We had a few moments of anxiety because we could hear motorcycles noisily racing through the wood. We did not particularly want to meet up with a bunch of scramblers. Fortunately they had moved on by the time we crossed the stream and entered the part of the wood they could access. We were now in the last stretch of woodland riding. I had not ridden this part for over a year and it was longer than I remembered. The trees grow quite densely here and the track is narrower, so it was quite gloomy. Dee became a little edgy and did her nervous dance - putting her head down to look closely at anything unusual on the path, whilst at the same time stepping sideways away from it. 'Anything unusual' could be a log, a piece of string, a stone . . . She looks so beautiful when she does this - arching her neck and pricking her ears, and she feels very light on her feet.

At last we reached the end of Coed y Wenallt and rode the short distance down the road to the driveway to Wyndham Livery. We had been riding for nearly 2 hours. I'm sure Dee recognised where she was because she walked faster and faster. She seemed happy to turn into Wyndham's drive, but then getting down to the stables turned out to be the most eventful part of the whole expedition. We opened the first gate and went through, but every time I closed it and got Dee near enough to bolt it, she nudged it open again. In the end we gave up and left it closed, but not bolted. Then we tried to get through the horse gate halfway down the drive, but Dee couldn't make this out at all. Then when 'ö-Dzin tried to do it on Red, Dee decided he was getting too close and started bucking and trying to kick him. She is usually quite tolerant nowadays of other horses near her on a ride, but at this point I think it all became too much for her. Eventually we succeeded in getting them both through the gate - still mounted - and rode up into the yard. The owners were waiting for us - despite it being quite late - and helped us settle them in, for which we were most grateful. Red was completely unperturbed - he had a warm stable and a feed and that was enough for him. Dee was quite wound up, but was not too anxious to settle to eat her food.

This morning Dee was still quite excited, but Red was perfectly relaxed. We are going to take them out for a short ride later to stretch their legs, as they will be stabled for the first 48 hours in their new home. So we have safely arrived.

(PS the photograph is of toadstools growing on the muck heap at Ridgeway - taken by 'ö-Dzin)
Posted by Nor’dzin at 13:49

I am so enjoying reading your blog! Thanks for the postings.

I think my favorite was the one about Dee, she sounds charming.

Yogic song is meditation through the medium of song. Glad you like the blog.