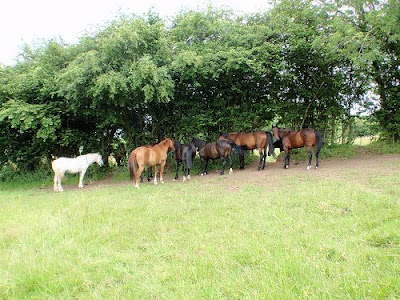 It is unusually hot here in Wales, and also very humid. Humidity was 65% today. This means that even the slightest exertion makes one sweat.

The horses are now down in the bottom pastures to allow the other fields to rest. We were not aware of this the first time we visited after their move and walked all the way across to the far field where we were used to them grazing – but no horses!

Eventually we found them all standing under the hawthorn trees. Our two are not in this first group because they are among the group on the other side of the shrubs. They seem to like the hawthorn – even though they can get some nasty scratches from it. It may be just that it is shady there, though we were wondering if the flies did not like this plant and so did not bother them so much when they stood there. 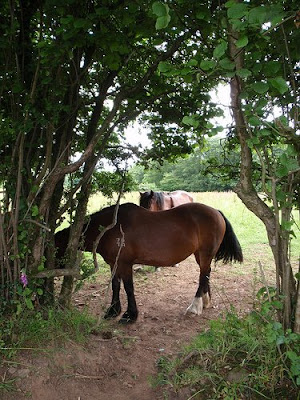 I went up to ride on Wednesday with my younger son, Richard. But by the time we had groomed them we were too sweaty and exhausted to ride. The horses were also already quite sweaty, just standing being groomed. It would have seemed unkind to put saddle pads and saddles on them and make them walk out in this humid heat. So we left them to it. We shall have to ride earlier or later in the day while this heat wave lasts – though it 11.30 pm as I write this and it is still too hot!
Posted by Nor’dzin at 23:08

65%! Wow! I have a low tolerance for high humidity. I feel like I'm being suffocated. I hope it cools down soon for you.

How strange the weather is this summer. We're having a very cool July with hailstorms. They are predicting another one tonight. Some friends who are farmers have lost their crops from the hail - really tragic. Can you hose down the horses when it gets that hot? My girls love it - or sometimes I just sponge their necks so it is cooler when the breeze blows.