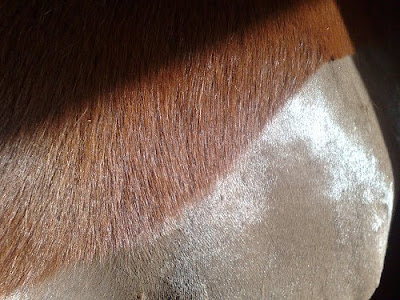 It's poured with rain all day today—absolutely torrentially—so I am happy that I was able to go for a long ride yesterday. It was the longest ride I'd been on for a couple of months and it was delightful.

Red and I set out after a rain shower, but we did not experience any more rain – in fact the sun even shone occasionally. We rode through the bottom part of the Coed y Wenallt trail, and then across the stream onto the bridlepath that links the wood with a road called Rhiwbina Hill. At the top of this bridlepath Red noticed a few horses in a field and neighed to them. I realised in that moment that he doesn't neigh all the time when I am out riding him on my own any more. I think he is feeling so content at Wyndham and happy that we have now forged a relationship, that he feels secure when we hack out alone.

We then rode on up Rhiwbina (pronounced Rh-oo-by-na with the Rh aspirated) Hill to the end of the lane that leads to Ridgeway, where we used to keep the horses. To my surprise, Red was quite keen to go down the lane. I had to encourage him to ride past it. Yesterday was not the day to go down there, but I will take him down there one day. I was interested that he remembered it so well and wanted to go there. Just past the lane is the entrance into The Ganol – my favourite woodland. This is just a little too far away from Wyndham for an everyday ride, so it was nice to have time to go there.

After a steep descent from the road, we were on the top track of The Ganol. This is a long, wide, straight track know by some riders as 'The Gallop'. The first part slopes gently down so we walked that. As we walked I said to Red that it would be good to have a canter for the rest of the track. As soon as we reached the dip I squeezed with my legs a little and he went straight into a canter. We kept going all along the rest of the straight part of the track, and even maintained the canter around the bend at the top and along the short stretch to the road. It was great. Red was like that throughout the ride – he seemed to understand what I wanted and responded. He was very relaxed, often walking with his head low, and I was able to ride him on a loose rein nearly the whole time.

We then made our way back at a fast walk (well we were going home...). On our return to Wyndham he was most reluctant to go out in the field. He is not like Dee, who would pull her head out of the halter in order to walk away from you immediately. He likes to hang around with me for a few minutes at the gate. Yesterday, however, he really didn't want to leave me. I think on reflection, that he was probably tired and would have preferred to have stayed in his stable munching haylage rather than having to slog up a muddy hill to get to a field with very little grass left to graze. It was only an hour or so until the horses would be brought in anyway. I wish I hadn't insisted he went out and had been more sensitive to his needs and wishes, as he had been so kindly sensitive to mine on the ride.

nordzin, red always loved the ganol, as you say we walked down the steep bit then cantered up the slope- on rounding the corner though i asked him to go right and we used to go over the fallen down branch (max eighteen inches)and he loved it! we then walked on to the road. That is why i thought he had done jumping in the past... he was not fazed by it at all. India though has found her feet and i has proved to be a real problem, massive talent but massive attitude which resulted in a broken finger for me ( but she can jump four feet from a standstill!).
I am sure all will be well once we have reached an understanding ( i am paying a horse trainer 3 times a week to reach that understanding!)
hope my finger is better soon, and wishing you well

It sounds like you had a wonderful ride. I'm so glad that Red is doing well and that you are both happy. I have those same moments that you describe about wishing I had done something different - a bit more caring-with my horses. They forgive us, which is one of the wonderful things about them, but I also always feel it's a good lesson that makes me more sensitive to considering my horses and their needs.

Hi Jayne, thanks for stopping by. Sorry to hear of your difficulties. I hope the finger gets better soon and India settles down.
Best wishes, Nor'dzin