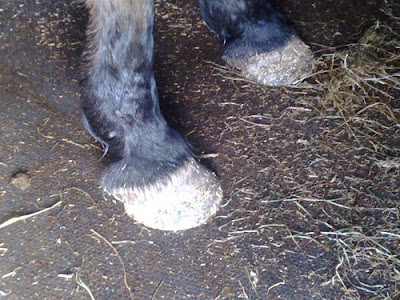 I'm trying to get Red used to having his legs hosed down on the occasions that I bring him in from the field. This doesn't happen too often because I tend to go up and see him in the morning. When we have needed to hose down his legs, it is like having a large prancing pony on the end of the leadrope.

Red has mud fever – not too seriously fortunately, and it is getting better quickly. There is no heat in his legs or swelling, just scabs. To treat the mudfever I have to clean off the mud, treat his legs with a liquid solution, and then dry them. He likes me to hold his leg to rub it down with the towel.

Red has tended to not like having his legs fiddled with in any way, but he has gradually improved over the 18 months we have owned him. It is a pleasure to pick out his feet nowadays, and he is being good about having his legs looked after. Fortunately he has never been too bad to shoe. His unhappiness with having his feet messed with does not provoke any malicious response, he just becomes extremely restless – which can be rather unnerving when in a fairly small stable with such a big animal. When he is restless he doesn't seem to have any awareness of where I am in relation to him, so it can feel slightly dangerous.

I think Red has always had quite an easy life, with good owners who have treated him well – or even over-indulged him because he is such a pleasant chap. I believe this is why he took so long to settle with us – it was a big change and he wasn't used to life changing. Moving him to a different yard after six months did not help, or trying him barefoot and with hoofboots. Now however, he is content and generally a ‘perfect gentleman’, as he was described in the advertisement placed by his previous owners. I think he is settled enough to try and get him over this aversion to having his legs hosed.

On Wednesday he gave me a bit of a shock. I was working on one of his front legs and he bit my head! It really hurt. I made it clear that this wasn't on, but on reflection, I think he was actually being a bit of a comedian and trying to take my wooly hat off. I think he misjudged how much force was needed. Nevertheless I feel it was important to make it clear that it had hurt and that this was not acceptable behaviour.
Posted by Nor’dzin at 21:52

I'm so glad that Red is happy and responding so well to you. When Siete was nervous about the hose, I started by just using a bucket of water and a sponge, then the hose and the sponge and finally just the hose. It only took a couple of times to reassure her that the hose was her friend. Also, is the water cold from the hose? I know that my little princess likes it warm when the weather is cool, and yes, I dry her with a towel too so she doesn't get a chill. I admit I'm a little over the top sometimes.

The water is very cold from the hose at this time of year. I always use warm water to treat his legs, so perhaps this is why he tolerates this part of the process well. It is not so easy to access warm water on the yard - I usually take a flask up. Perhaps he is very sensitive to the cold water and it may just be something he can't cope with. I know I wouldn't be too keen on being hosed down in this weather!