One of those days 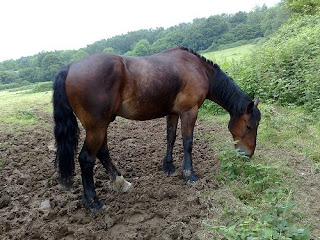 Today has been ‘one of those days’. I was a bit late getting to the stables because our guinea pig was ill and I had to attend to him a little before I left the house. Consequently the horses were a little put out at receiving their breakfast half and hour later than the other horses. Dee was quite muddy so I gave her a more thorough groom than usual and it was clearly all taking too long because she nipped me on the bum. This is the first time she has ever done this – I think she’s learned it from Red. It was not a serious bite, but still made me jump. She was impatient at the field gate as well, trying to pull away from me and out of her halter before I’d undone it. I had to be quite firm with her to get her to stand and wait.

Returning to Red I started to get him ready for turning out. He wasn’t keen on having his feet picked out first, and wouldn’t stand still or give me his feet. How did I ever imagine that this horse was a good candidate for hoof boots … After failing to get at his hooves, and with him looking at me as if to say: ‘So what are you going to do about it?’ in a smug sort of way, I decided to try an idea that occurred to me after reading a post about resistance on Carolyn Resnick’s blog. I so often find her blog helpful. Red wanted to move rather than stand and have his feet picked, so every time he moved rather than giving me his foot, I walked him in circles. I made no big deal about his refusal to co-operate, I just walking him in a circle three times every time he either moved, or stamped his foot down half way through the process. This worked well apart from one time he stamped his foot onto my big toe. Ouch. I now have a painful toe that is swollen and gradually turning black. It was not deliberate on his part however – I just let my foot get in the way. On the whole the method worked and I was able to pick out his feet with the minimum of difficulty. He caught on more quickly than I expected, as sometimes he seems to be quite a daft horse. I only had to repeat the circling a few times before he decided to stand and give me his hoof. I’m really pleased that I now have a way of improving this daily interaction.

I rode Red on Monday for the first time in months. It was quite a challenge for me to get up on his back. I don’t know why I avoid riding him as he is at his best when being ridden. He was well behaved and responsive. I carried a whip because he has been a bit naughty and nappy with ’ö-Dzin a few times, and he respected that. I think because he bullies me a bit on the ground, I have become nervous of getting on him. We had a nice ride – a little work in the arena and then a short hack into Coed y Wenallt. Hopefully I will not be so nervous about riding him in the future.

I returned home to a guinea pig that looked even more poorly, and so took him to the vet. Sadly his condition was beyond hope and I had to let the vet euthanise him. Poor little chap. Only a day ago he was skipping around his run as usual. I shall miss him. He was the last remnant of our sons’ childhood pets. At one point we had a whole herd of guinea pigs, but he was the last and there will be no more.
Posted by Nor’dzin at 16:12

Awwww. I am so sad. Guinea pigs are so wonderful and should be allowed to live forever. I hope your toe heals quickly. I got kicked in the ankle when Bombay spooked while I was removing one of his hoof boots. It's one of those things. What can you do?