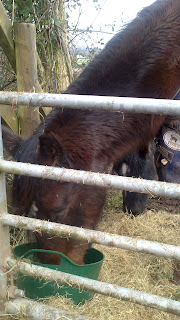 Dee has made a friend – or perhaps more accurately: she has befriended a little horse.  His name is Goliath and he is two years old.  Dee will let him share her pile of haylage and be right up close to her.  I fed her at the gate the other day and she was quite happy for him to be by her while she fed. 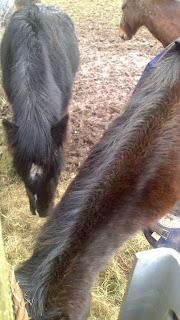 Red, as usual, was not too far away from her but she would not let him any closer.  He only had to come within a few yards and she would whip her head round to stare at him, ears laid flat.  I was able to scrabble down to the fence a little way along from the gate though and called him over for a few treats, so he was not completely left out.  He always looks so forlorn but it is just a big act.
Posted by Nor’dzin at 22:14