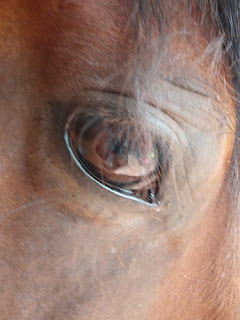 We spent a lovely morning with the horses today.  We did not ride because the weather is so unsettled: one minute the sun is shining and the next there is torrential rain.  Instead we just groomed them and hung out with them for a while.  Dee is looking rather round – not so surprising with this perfect warm and wet grass-growing weather.  Red was sleepy and relaxed – closing his eyes and letting his bottom lip droop as 'ö-Dzin brushed his tail and I stroked his face.  Then Dee would indicate that it was her turn for a bit more TLC and I'd have to return to her stable to fuss her some more.

I still find it surprising how little mud they have on them even though they are out at pasture in all weather.  At Wyndham they would get ridiculously muddy – it could take an hour to get it out of their coat, and Red would usually have thick clods of mud up to his knees.  I think it was because of the routine at Wyndham that they were stabled for part of every day.  They all knew would be fed when they were brought in, so they all used to congregate around that time, which meant that the area by the gates became like a quagmire and they would all hang around there for quite a while.  At Briwnant they also get a feed if they are brought in, but this does not happen at the same time everyday or even everyday, so they do not hang around the gates in the same way, churning up the mud. 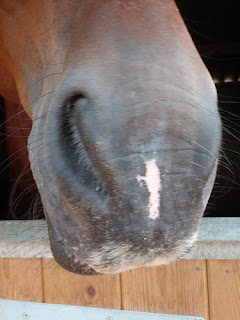 Different yards have different approaches and each have their benefits and drawbacks.  Personally for my lifestyle, and for the irregularity of the work I ask of my horses, it is better that they can be at pasture.  Dee has been living at pasture now for seven months—including her sojourn in Cornwall—and is noticeably fitter than she was when she lived at Wyndham.  I believe this is because she can move all day as she grazes and have a gallop around two or more large fields a couple of times a day with the other horses, rather than being static for half the day or more in a stable.  I simply have too complicated a life to be able to guarantee riding each of my horses several times a week, which is essential to keep them fit when they are stabled a lot, so the style of livery at Briwnant suits us all very well.

PS I have started a new blog about our adventures in Bertie, our new motorhome (well old actually).  It is called Transport of Delight.  I still occasionally muse that we should have bought a horse truck instead...
Posted by Nor’dzin at 00:25