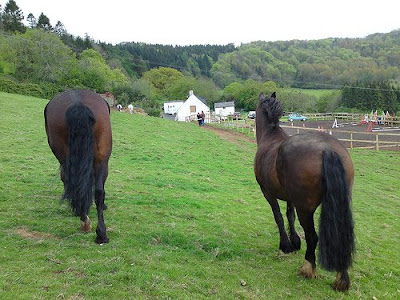 Dee and Red have been in for a couple of days while being wormed. Each yard seems to approach worming in a different way. Dee and Red are in stables opposite to each other, so they are quite happy. Dee whinnied when she saw me arriving yesterday. They were using Red in a lesson. He seemed a little perplexed as to why I was there, helping with his tack, but someone else was on his back. He seems to be fine about being ridden in lessons though.

Today I rode Red around the Wenallt horse trail. He was not keen on being out on his own and being parted from Dee. He neighed a lot and was quite agitated. On meeting another horse and rider near the beginning of the trail he put in a buck when I would not let him turn round to follow this horse. This is the first time he has ever done anything like this on a ride, which demonstrates that he was quite wound up today. When we eventually made our way down to the more level part of the trail he enthusiastically went into canter when asked – rather too fast a canter for the terrain and I had to steady him. I was glad to be wearing a helmet as there were a lot of low branches. We managed a second canter further along the trail, and again he put on quite a burst of speed. I’d love to take him somewhere one day where I could really just let him go as fast as he’d like to.

Towards the end of the trail we met a friend from Wyndham leading her daughter on their mare. It was nice to see them. I walked Red thereafter, whereas I might have suggested another canter, but didn’t want to risk exciting my friend’s mare while she was leading her by racing off ahead of them on the trail. Turning for home back up Wenallt Road, Red became extremely vocal and agitated again. I kept rubbing him along the top of his mane and telling him everything was okay, and remembering to keep my breathing deep and slow. He would settle for a bit and then start to get worked up again. He is a sensible chap though and—in my experience—can be relied upon to do what is asked of him, so this gives me the confidence to usually remain quite calm and relaxed even when he is wound up. If I need him to slow down, he will do so; he may make a fuss and neigh continually, but will not do anything silly.

Back at the yard I groomed Dee. She is looking beautifully dappled as her summer coat comes through. Her nice round shape and level of fitness is a credit to the care she received over the coldest months of the year at Gorgeous Grazing. Tomorrow Dee and Red’s period of stabling will be over and they are going to be introduced to the main herd. They laughed at me when I pulled a worried face about this, but I am always a little nervous of Dee meeting new horses because of her history. She has only had one altercation of note however in the two years or more since she was reintroduced to being part of a herd – so I really should stop worrying. I’ll let you know how it goes...

We shall ride them together again at the weekend. Dee still does not have front shoes so we are limited in how much we can do at the moment. I think it was my fault that she got a little freaked out last Sunday when I was catching her. I am going to endeavour to do better this weekend.
Posted by Nor’dzin at 00:10