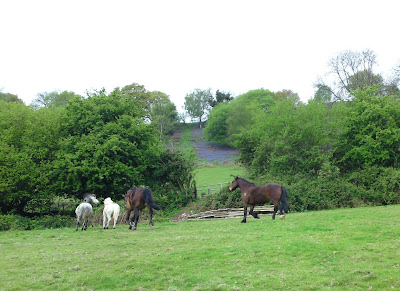 Dee is being quite challenging now that she is home. I think I have to re-establish my relationship with her to some degree – after all I did load her onto a lorry and abandon her for four months. I know she is happy to be back with me and Red, but it seems that we have to start over to some extent. It reminds me of when I first had her and the challenges we had to work through at that time.

I was interested in Victoria's post Dodging a Bullet. She says about Siete: "My lack of trust in her and in myself is like a high fence between us." I feel this too. Although I know that Dee and I have a close connection and deep affection for one another, I am nervous of her when she is loose in the field and can get anxious when catching her. At Briwnant it will be necessary to catch her every time I want to groom her or ride her, so I am going to have to build up my confidence again about doing this. She seems to be full of energy and she and Red are often racing around the field together when I go to check them. Sometimes when I'm in the field she'll decide to shoo off another horse and I worry that I will get in the way and get trampled. When catching her in the past she has sometimes not wanted to be haltered and pulled away from me; or she has let me halter her and then decided to take off, ripping the rope out of my hands. On Sunday she let me halter her and then, as we walking up the field, she suddenly became agitated, reared up and took off. She caught me on the shoulder with a front hoof – nothing serious fortunately, but it adds to my fearfulness. 'ö-Dzin brought her in after that and she was perfectly fine with him, so I do not know what it was all about. She continued to be fine while I groomed her and tacked her and behaved well on our short ride.

This was the first time she had been ridden in four months, and she is still barefoot, so we did not go far and avoided the track and the road. We rode where the ground was soft earth—even muddy and wet in some places—and not for too long. She was certainly up for it and rather lively. She seems to be fitter than she was when she left Wyndham which I think demonstrates well that horses keep their condition at grass rather better than when they are being stabled for a large part of the day. The trail we rode on Briwnant land included a steep hill and they were both keen to lope up it.

The bluebells are in bloom at the moment and the hillsides here about are a beautiful haze of blue blossom, which I hope you can see in the background of the photograph of Dee and Red chasing around after two ponies. It was wonderful riding through these blue haze hills, and the green of the new undergrowth is almost fluorescent it is so vivid.
Posted by Nor’dzin at 20:35

I think that Dee is testing you. I know I sound like I'm trying to help Mark Rashid sell his new book but it's really been incredibly insightful to me. I hope you will check it out. Some people have the ability to not get the least bit ruffled if a horse rears up on the end of their lead line. The first couple of times it happened to me, I was terrified. Now, I've been able to keep my adrenaline from spiking and circle the horse and step towards the horse's shoulder, not away where it can strike me. It's still a challenge, but Rashid talks about how you have to bring your energy level down to a calm, quiet place to balance the horse's higher energy. It's very helpful the way he explains it. Also, I've been sitting while my horses graze the way Carolyn Resnick suggests - even if you don't feel ready to actually sit in the pasture with Dee and the other horses, just being in there with her without any reason except to " be" will help her to re-adjust to including you in her herd again. With Siete, I've been making a very conscious effort to treat her with the same level of attention and trust and to talk to her when I'm with her the way that I do with Silk. I am already sensing that she is softening towards me. Good luck - I'm so glad you didn't get hurt when Dee reared.