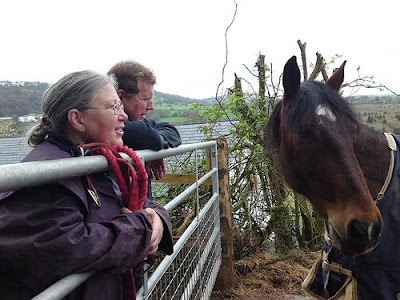 This morning we moved Red to Briwnant Riding Centre. 'ö-Dzin rode him over and I drove there with a car-load of rugs, tack and horsey items. We put Red into a stable for half and hour and then turned him out into a field. He is out with a few young and quiet horses who will not challenge him to start with, in the pasture next to the main herd. He will be introduced to the main herd in about a week once he has had time to get to know them. They will not work him for his first week either. 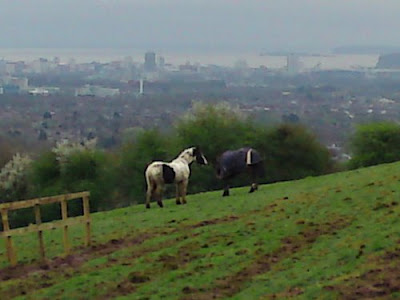 Red wandered out into the field completely relaxed and content. He had not neighed at all and seemed perfectly happy – which is quite a contrast to when we moved him to Wyndham, where he was very vocal and unsettled even though he had Dee in the stable next to him. So this bodes well. After about five minutes one of the young horses in the field noticed the new arrival and trotted over to meet Red. They greeted each other in a friendly way (photo 2). This photograph also shows the magnificent views from Briwnant – right across the Severn Estuary to England. Soon the other horses came over to check Red out. One of the mares was a bit fiesty and kicked out at him, but she has no shoes on and Red just got out of her way. It is a large field with plenty of grass, so he just wanted to graze. By the time we left he seemed to have made friends with two horses and they were grazing near one another. I have a good feeling about this place.

Another happy occurrence is that we met a lady we knew from Ridgeway at Briwnant. She had been interested in buying Red at one time, or loaning him, but decided she was not ready. She rode Dee a couple of times. She now has her own horse, a lovely mare called Star. I was so happy to meet her again, and I think we may ride together. It seems there may be more opportunity to ride with people from Briwnant.

I am sad to leave Wyndham. We have been happy there and Sally has been very kind to us. However I feel confident that Briwnant will be a good move for us – certainly Red seems relaxed there already. I shall telephone later this evening—after the time he is used to coming in for a feed and to be stabled for the night—to see how he is. They will feed him in the evening until he is used to the Briwnant routine, and will bring him in and stable him if he is distressed – but I think this is unlikely. I think he will be quite content to stay out in such a large field with plenty of grass.
Posted by Nor’dzin at 15:08