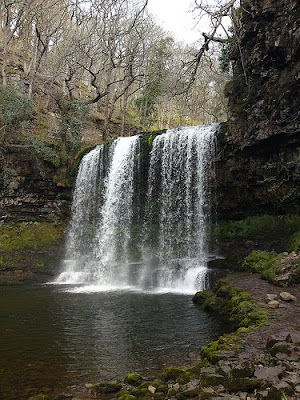 It is a family tradition that one day over the weekend closest to one of our birthdays, is set aside for a fun event chosen by the birthday boy or girl. Last weekend it was 'ö-Dzin's 50th birthday. As his treat on Saturday, 'ö-Dzin chose a walk to visit a waterfall called Sgwd yr Eira – Falls of Snow.

It is about an 1½ hours walk from the car park in Pontneddfechan, but we had a couple of false starts, so it took us more like 2 hours. The last part was a very steep descent down uneven and difficult steps. I found this really hard going on my knees, and our son Daniel—who is dyspraxic— also struggled. Foolishly I had forgotten to take any walking sticks with me.

The waterfall was magnificent. It is especially delightful because the footpath goes right behind the waterfall. It is aptly named because the water does have a snow-like appearance as it falls feely from the high rock. 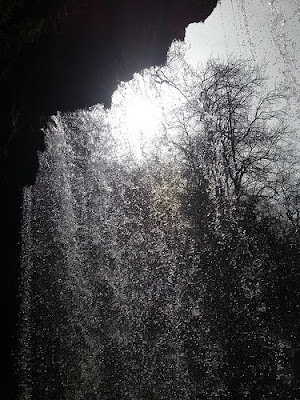 Neither Daniel nor I fancied the walk back up the steep steps, but the only alternative was a much longer walk back taking another route. After much debate this is what we decided to do. It was certainly a much easier route, with gentler and more even steps and then a wide and easy track thereafter. Eventually we arrived at the road after passing by another of the waterfalls for which this area is renowned, Sgwd Clun Gwyn – White Meadow Fall.

It was our hope that we would find a path that cut across from the road to the southeast, as the road was a long way to return to the car park. Luckily we did find a pleasant path, however this tantalisingly took us to within view of the track by the river that we knew led to the car park, but did not seem to offer a means to get there. The path took us to the top of a bank above the river but then headed off in a different direction. We were reluctant to follow it further. By now we had been walking for over four hours and we were all tired. We decided to take a risk and scramble down the wooded bank rather than face a walk of uncertain duration on a path that was not even necessarily going in the right direction. 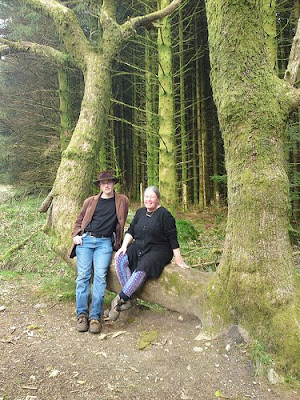 It took us about half an hour to scramble down the bank, moving from tree to tree for support, sliding on our bottoms sometimes, and zigzagging across on foot at others. The incline was almost vertical and about 100 feet down we estimated. This is fairly typical of our family expeditions – we always seem to end up having more of an adventure than we anticipated! We all arrived at the bottom of the bank safely. It took us a few moments to get our bearings and then we made our way to the bridge across the river so that we were once more on the path where we had started, and back at the car park in ten minutes. Phew! We'd been walking for about 5½ hours; we were footsore and tired; but we had also had a wonderful time. I was particularly proud of myself as this is the longest walk I have undertaken since my knee injury. There was a time when I thought I would not be able to do such a walk again this lifetime, so I am delighted that I survived it.

Unfortunately our exertions on Saturday meant that we were too tired to ride on Sunday, so we just visited Red and made a fuss of him. We are moving him to Briwnant on Friday morning. I am counting the days till I see Dee – less than two weeks now. She is reported as fit and well and has been without her rug for three weeks now, as it is milder in Cornwall. She and her herd friends have the run of two large fields at the moment, until the grass starts growing, when they will be restricted to one again. So Dee has plenty of space in which to roam.
Posted by Nor’dzin at 20:32

What a beautiful place!