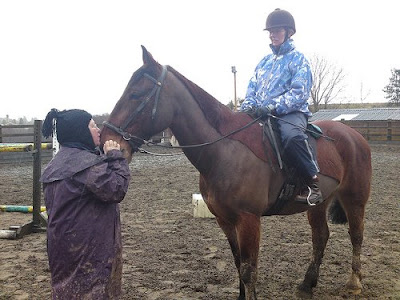 This photograph was taken on Sunday. We just about managed to grab a half hour in the arena between the bursts of torrential rain. 'ö-Dzin rode Red first and he was really good and willing. Then our friend—who you can see in the picture—rode him, and Red was a little naughty. You could almost see him thinking, “Who is this? Why do I have to have this person on my back that I don’t know?’ He kept doing little bucks if she asked for anything more than a walk – and even the walk was reluctant. He’s a funny lad.

Last week I took him on another slightly adventurous ride. We went the road way to Rhiwbina Hill and then back through Coed y Wenallt. This is the first time that we have ridden this route on our own and he did get a little nervous, but behaved well despite this.

This morning he was in a mood. I had to put a headcollar on him and tie him in the end, because he would not stand still to be groomed and tacked, and I was not keen on being bitten or trampled. I know he is a bit ticklish under his belly, but this morning he was being excessively silly about the mud being removed. We then rode the Coe y Wenallt circuit – through the wood and back down the road. He was less nervous about the far end of the ride this time. However we have had a lot of really strong winds here over the last week, and there was quite a lot of debris on the trail. This made him rather spooky.

He is a funny horse. I prefer to ride on quite a loose rein, but this is not always possible with Red because he is likely to suddenly head off the track into the undergrowth if I let my concentration lapse. The track is clearly visible, but he just seems to like to wander off it if he is given the chance. On one of 'ö-Dzin’s first rides on Red—before we were aware of this idiosyncracy—Red quietly walked into a hedge. It was quite tricky for them to extricate themselves from its prickliness, and the only way out was to back him. This seems like a strange thing for a horse to do. Does anyone else have a horse with this habit?
Posted by Nor’dzin at 15:00

Found your blog from WHP, and I've been quietly enjoying it.

When I first started hacking out my green Percheron, he would go straight. No matter if the path took a gentle turn and there were chest-high brambles straight in front, Poppy wanted to go straight. Off the bank into the creek, through the vines, whatever. It was like riding a rather excitable bulldozer.

He got a bit better over time, but he still tends to plow right through obstacles. :)

Thank you for your comment funder, and I'm pleased that you enjoy the blog. I'm glad to hear that Red is not the only horse who does this!

My big fellow Doru can take an inquisitive turn from time to time, and will try to head off the trail if there is something that interests him. I have put this down to boredom and try to vary the riding routes to make his life more interesting. On a less frequently visited trail he is rather less likely to try to turn off.

He could be bored - but the only way to avoid the first part of the Wenallt trail when I ride out would be to take the road and that is not so nice for either of us. I do try to make little differences to what we do every ride, but the scope is a bit limited. Thanks for the thought.