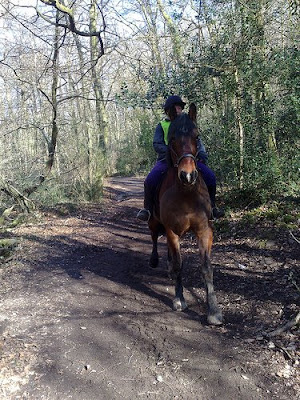 Tuesday afternoon was strangely quiet and subdued. It was as if the world were holding its breath. Later it rained—gentle, fine rain—but remained windless and calm. I decided to ride Red the full circuit of the Coed y Wenallt horsetrail. Three quarters of this ride is through the woodland, with the last quarter being along a steep and narrow road. Red has traversed this full route only once before, with 'ö-Dzin riding him and with me on Dee, but in the direction of the road part first. On Tuesday we rode it finishing with the road part of the circuit.

We set out a little before 4 pm. The dullness of the day meant that it was already fairly gloomy in the wood, but we had a good hour of light left. Red was a little reluctant to begin with, and I had to gently encourage him, but he gradually became more interested in being out for a ride.

Red happily jumped over the log when we reached it. I did not ask him to canter up the hills this time as he still needs to get fitter and I wanted to canter the last part of the trail where it was not so steep. This all went well as this was familiar ground for Red. However he now expected to turn round and head for home through the woodland, as we had done many times. Red became unsettled when I asked him to carry on. He did as he was asked, but started neighing—which he hasn't done on a ride for a long time—and seemed a little tense.

I tried to reassure him by talking to him and stroking him. I also sang mantra to him which I often finds helps when things get tense, as it relaxes us both. We reached the road and started on the final part of the ride. One of the reasons for doing the ride in this direction was that the light was better on the road now that it was getting late in the afternoon.

It occurred to me that Red may have wondered whether I was taking him away from Wyndham, which I think he now thinks of very much as 'home'. It was late afternoon and a similar sort of day when we rode from Ridgeway livery to Wyndham. Might he have remembered this journey – and being on what seemed to him to be unfamiliar territory wondered whether this was what was happening.? We were also quite near Ridgeway at the end of the Wenallt – could he have sensed his previous yard or smelled the horses? I will never know, but feel that it is a sign of the trust that is growing between us that he continued without any arguement.

Going down the road, we had to turn around once and go back up the hill a little way to allow a car through, and duck into a track for a few moments later on for the same reason. Red behaved perfectly – I am so proud of him. At last we reached the part of the road that he recognised and soon we were home.

You should feel really good about a solo ride like that with Red. Congratulations. I hope you have a cell phone with you when you're out there.

Yes Victoria I certainly do always have a cell phone with me. I agree that it is essential. I used to put it in a little saddlebag, but one day I read somewhere that it was best to have your mobile in your pocket - rather than potentially on the horse who had just thrown you and was disappearing from view as it headed for home!