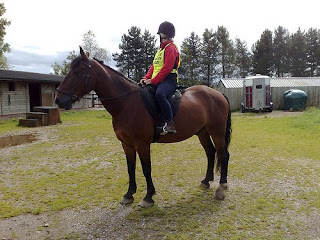 I have taken the plunge today and bought Red a pair of hoof boots. His feet felt very hot on Monday after our long ride on Sunday, and although he did not seem uncomfortable and was not lame, I was a little concerned. It is so wet at the moment that his feet are softer than usual. His hooves are almost round and quite large, so after a long night of research on the web I chose Boa boots. I liked the look of the Old Mac boots, but they do not make them big enough for Red. The other option was an Easyboot, but they are reported as a little more tricky to put on. I’m hoping they’ll arrive tomorrow or the next day on express delivery.

The arena was unusually clear today, with all the jumps stacked away. I took advantage of this – dodging showers as well – to take Red in there for some join up and halting groundwork. I find him intimidating on the ground because he pushes me around, so I need to work with him to build up respect and a relationship. I worked with him at liberty walking around together and halting periodically. Whenever he stepped ahead of me when we halted I made him back up. Gradually he improved, stopping by me instead of pushing ahead of me. He wandered off only twice. When he did, I drove him on round the arena until he stopped and looked at me, and then I turned to allow him to join up again. It was a good session and a good start. I wish I had access to a round pen. Although it is a fairly small arena, it is still a little too large for some groundwork and not really any good at all when it has several jumps dotted around it – so I was lucky today.

There was no way I could give Dee her feed – as I went up there on my own today – without Red being aware that I had done so. So Dee had to wait for her feed until I had worked with Red. She was not impressed with this and was very moody with me even after I had fed her, and also kept sticking her head out of the stall to pull a face at Red. When Sally took him out to the field for me, Dee settled down and decided to appreciate my full attention, a groom and a chat as we wandered down to her field. I also checked her over thoroughly yesterday and today after our long ride on Sunday – especially as it was the first time she had hacked out for four weeks. Her back was fine - no sign of any return of the swelling or pain that she had experienced 18 months ago that led to the vet warning we may have to retire her. Far from harming her back, the treeeless saddle seems to have contributed to curing it.

PS The photo shows my friend on Red who came with us on the ride on Sunday. Also good news – the horse that had strangles has returned three negative swabs and will be back in his stall tomorrow.
Posted by Nor’dzin at 23:08

There's a hoof hardener called Keratex that I've used for many years. It seems to really help with the softening that is caused by wetness. My farrier also recommends it. You can buy it from the website and one bottle for two horses usually lasts me for more than six months. I'm looking forward to hearing how the boots work for Red.