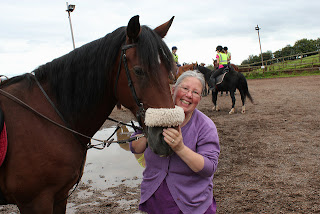 Yesterday was the August bank holiday fun ride at Briwnant Riding Centre.  We decided not to ride but to go along as helpers again.  Red was tacked up and ready to go when we arrived and we enjoyed making a fuss of him and meeting his rider.

The man riding Red has not been riding for long, but rode him competently and with confidence.  Red—as usual—was over-excited because it was a fun ride, which is why we don't usually join in.  We prefer our quiet rides out together, just the two of us.

We brought Dee in to groom while the ride completed the hacking part of the fun ride and then waited for the horses to return.  We then went out to the fields to act as marshals for the cross country part of the fun ride.  These tyres were the first jumps on the cross country course and most of the horses did not like them.  Red was acting very frisky and skirted them, barely jumping.

'ö-Dzin has a new fancy camera and succeeded in capturing some good action shots. If any readers of this blog were riding on this fun ride, ask Briwnant later in the week whether there is a picture of you among the set we are giving to Briwnant. 'ö-Dzin took a photograph of most of the cross country riders.
Posted by Nor’dzin at 13:33