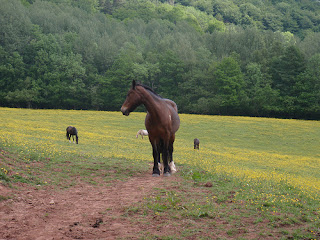 Hmm... not too sure whether I want to leave this lovely field of grazing to go to Nor'dzin... 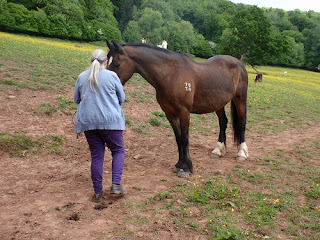 Dee came happily to have her headcollar put on after only a few moments of hesitation.  Red also did not come to call as readily as usual, but was pretty obliging.  Who can blame them for not wanting to leave their pasture after the winter we have just been through.  Yet despite the hard winter they are both fit and really well.  I cannot get over how athletic Dee is looking at age 20.  She moves with great suppleness and energy.

We took them on the longest hack we have ventured in quite a while and were out for 2 hours.  Today was also the first time we have taken Dee out for a proper ride in her hoofboots.  She has been feeling some discomfort from the stony tracks in her unshod back hooves – always seeking the soft ground and being reluctant to move faster than a walk on some parts of the trail.  She got used to the boots quickly and soon realised that she was more comfortable.  It was amusing to watch her going for the softer bank, realising she didn't need to, and then strolling across the stones.  She was definitely more relaxed and much more willing to sustain the higher gaits.  We had a few nice canters today.  It was also a relief to not be teetering on the banks of the trail which I used to worry were not always too safe.

Today's ride certainly put the Cavallo Simple boots through their paces.  We took the route across the stream in the Wenallt and then up the really steep track to Ridgeway Lane, near where we used to livery them.  Then we rode into Ganol Wood and back across Rhiwbina Hill into the Wenallt, taking a left after the stream so that we ended up at the top of the hill to ride back through Briwnant fields.  'ö-Dzin nobly dismounted and remounted twice in order to negotiate the gates.  He took the next picture from Red as we rode these fields. 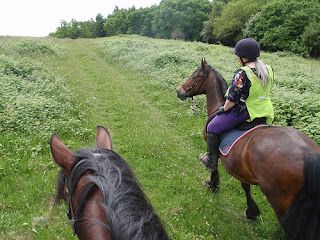 The boots are really... well... simple... to put on and the pastern wraps reassuring that they will not rub.  One pastern wrap had worked its way down into the boot on this ride, but Dee had no sign of any rubbing or sensitivity to wearing the boots.  It was a delight to experience her feeling more relaxed on the trails.  I know how I feel when my feet hurt, so it is not surprising she was a bit tense and reluctant to go forward sometimes.  I'm really pleased with the boots and would recommend them.  They seem quite wide but Dee did not seem to feel insecure in them and the length is a good fit.  They also stayed on without moving out of the correct fit, and showed no sign of working loose despite scrambling up hills and sploshing through the stream twice.
Posted by Nor’dzin at 23:31

How wonderful that these boots have so simply made a change to your ride! I've heard of the same for Old Mac boots here in Australia and have a friend who uses boots on her endurance horses - they're a great invention.