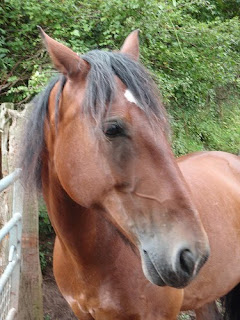 Following on from my intention to work with Dee a little more often, we visited Briwnant this afternoon and headed across the fields to catch her.  We called her and she met us part of the way – closely followed by Red.  Dee and Red are no longer always together in the field these days.  Dee has established her own circle of friends in the herd, but nevertheless I think Red is usually aware of where Dee is.

I only had Dee's halter with me.  She was happy to be caught – I think she trusts me again now and is confident that we are settled at Briwnant.  We ambled back to the yard, taking our time, with Red following on behind.  I then brought Dee in and fetched Red's headcollar for 'ö-Dzin to bring Red in.

After grooming them both we did a little groundwork in the arena with both of them—as Red did not want to be left out—just leading them at the walk.  We performed serpentines, circling around cones, circles on the spot, halting and standing, and backing.  The idea is to get her bending and stretching and using her body more than she will just grazing in the field.  Red has not practised so much groundwork with me as Dee and he sometimes seemed a little confused by what we were doing, but Dee remembered it all very well.  I watched her closely while circling on the spot and crossing one hind leg in front of the other as she stepped round, and it did not seem to be causing her any problem. 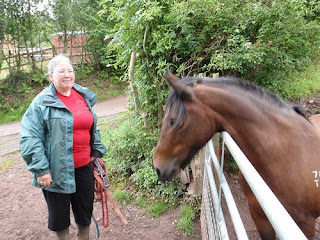 I hope to have a chance to work with Dee a couple more times this week so that hopefully she will be ready to take part in Briwnant's fun ride next Saturday.  I'm really looking forward to this.  However I don't want to push her too much.  She is certainly no longer lame, but I cannot decide whether her hind leg is still rather stiff or whether I am imagining it.  I shall ride her a little later in the week and see how we get on.  There will be a few small jumps on the fun ride which Dee will love to jump – if she is fit enough.

When we turned them both back out to the field, Dee hung around at the gate a long time, not seeming to want to leave us.  Red stayed there as well.  He would not head back to the rest of the herd until Dee decided to.  I get the strong feeling that Red has a great loyalty towards Dee and feels protective of her, even though he knows she can be grouchy and give him a hard time.  Dee I feel takes Red's loyalty for granted, and yet relies on him and is more content with him there.  He gives her confidence.  They were so sweet today.
Posted by Nor’dzin at 23:59