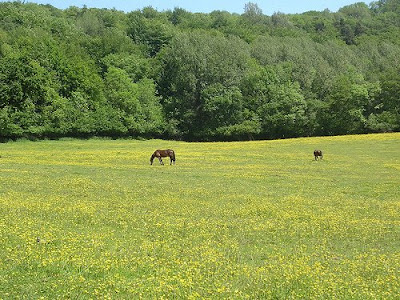 It is interesting that there is less to say when life is running a little more smoothly. Difficult times are newsworthy, whereas contentment does not make the news. Difficult times make us focus on their form and try to manipulate it; contentment has more space, more emptiness, so we cannot manipulate it so much. Dee and Red are content – so I find I do not have much to write in my blog. In this photograph they are grazing in the far field which is yellow with buttercups. It is an idyllic scene. They are so content that Dee is behaving like an angel – immediately accepting a head collar and following me on a loose lead rein from the field. Red is also a delight.

The weather this week has been extraordinarily hot and sunny. We are not used to it and I find it a little exhausting. Unfortunately—despite the fine weather—we are not finding much time for riding at the moment, but we did manage a couple of hours on Sunday. We took them to the Ganol as they have not been there for quite a while and we thought it would make a change for Red. Most of his rides with Briwnant are around the Wenallt trail. I don't want him to get bored and sour. I've noticed that Dee is fitter than she was before we moved her to Cornwall in December – she copes with hills much better. I surmise that living at pasture without work, even during the hard winter months, is preferable for keeping Dee fit than being cosseted but stabled half the day.

Red is an easy-going chap so he never gets into trouble. Dee is more assertive and so gets into some argy-bargy in this large herd that they are now a part of. She has become well integrated nevertheless, so perhaps it is still early days and will improve. I brought her in today for a bit of TLC because she has been kicked. It is nothing serious and probably due to her being pushy with another mare. Paul tells me that she has settled out at about fourth mare in the pecking order. Dee so loves being groomed and became very soft and sleepy while I brushed her.
Posted by Nor’dzin at 19:13

Thank you for coming over for a visit to Spruec Hill! I hope you come back again!

What a beautiful photo of the field with them in. Are those buttercups?

Lovely photographs on your site; and yes Rin'dzin buttercups. The horses don't seem to eat them so they thrive.

Contented horses are a gift to enjoy. I'm glad that you are getting good rides in a beautiful place and that the horses have adjusted to their new home so well.