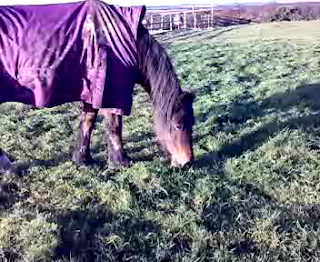 Dee is safely settled in her new home. I was so proud of how she behaved from beginning to end. As I put on her tail bandage in preparation for the journey, she seemed to know that this meant something was happening. She stopped eating her haylage and became lively and interested in what was going on. She loaded onto the truck with minimal fuss – only needing a little encouragement from a bucket of feed. Once on, she was calm and made no fuss about being so close to another horse. I was a little worried about Red. He became upset when I took Dee to the truck. He kept calling for her, but there wasn't anything I could do for him as I had to go with Dee. (They told me today that he was fine and soon settled down.)

The journey was easy and uneventful. We stopped to unload Jess's horses at her place first. Dee—understandably—became a little restless when the other two mares were unloaded, and she was still on the truck, but I stroked her and talked to her and she quickly settled down again.

Unfortunately it was dark by the time we arrived at Gorgeous Grazing. This was not ideal and the decision had to be made as to which would be more acceptable for her: being turned out into a field she didn't know in the dark, but next to other horses; or being put into a stable on a yard she didn't know where there were no other horses. I decided on the former. I felt she would be happier being able to graze and stretch her legs near other horses. We were able to get her travel boots off and her turnout rug on while she was still on the truck. I led her down the ramp, paused while Kim removed her tail bandage, and then led her straight into the field. It seems to have been a good decision as she showed no sign of distress and quickly began to graze – in fact I think she was so thrilled to find such thick, long grass that she felt right at home. We kept her head collar on in case she became distressed and we had to catch her quickly. We then left Dee for an hour or so, returning to the field later to check her. She was grazing contentedly, so I took off her head collar and said goodnight to her.

Kim at Gorgeous Grazing is giving her hard feed every morning at the moment, as this is what she is used to, but we think she will not need it on top of haylage twice a day while there is still quite a lot of grass. All the horses will be given hard feed as soon as they need it. The following morning I went to see how she was. She didn't really want me too close at first – probably in case I was going to put her on a truck for 5 hours again – but soon let me stroke her. It wasn't a very nice morning in Cornwall on Tuesday: cold, foggy and a little drizzly; but Dee was warm and dry under her rug. I visited her again in the afternoon, and yesterday morning before I had to catch my train home. When I'd left her on Tuesday morning, she'd looked up as I went as if to check where I was, but yesterday she didn't even raise her head as I left the field. Dee has never been a demonstrative mare, so it is difficult to tell whether she feels lost or confused, but it did not appear so.

And me? All through the journey down in the truck I kept feeling I couldn't believe it was happening; am I really going to leave my beloved mare in a field 200 miles away with people I don't really know? The three days in Cornwall had a strange dream-like quality. I feel certain she will be content and well looked after. The field she is going to be in is huge – 20 acres – and she will be with 6 other mares of various ages and sizes. There are a few geldings in the field next to them. All the horses looked well and extremely calm, and it is so quiet and peaceful there. I know all this, but it is like leaving my child at boarding school. I'm so going to miss seeing her every day and have to stop torturing myself with thoughts of "what if she misses me or needs me and I'm not there?" 'What if' musings are always a complete waste of time because they are about an imagined or projected future and not about the present moment. As Dee seems so settled already, she will be out with her new friends by the end of the week.

Tears are very near the surface with me at the moment – especially writing this – but Kim is happy for me to phone as often as I like to ask how Dee is. It was strange being at Wyndham today with only Red to tend to, but he seemed pleased to see me at least. He's been moved to a different stable on the other side of the yard which I think he likes much better – he is next to his chums and more in the middle of things. Our previous stables were the two right at the farthest end, so there people did not walk past and say hello to him so much.
Posted by Nor’dzin at 17:04

Such a brave decision to make. I know it has troubled you for a long time, what the right decision was for your horses.
You know I wasn't able to make such a sensible decision, I do worry that I have made the right decision to bring him to Montana, it was -28c over here this week. Lots of rugs and shoes off, complete change of diet high fat and protein to maintain body weight in the cold. I am assured by Kathy at Fox Ranch that he will adapt.
I am really glad Dee appears to be settled and did the journey well. You can see her when you go on retreat in Cornwall.
Keeping Red is good, he is a reliable and kind horse that you can both enjoy.
Much love
Ta-tsal

I am glad that you have found a good solution. You have put a lot of thought into what is right for your horses.

Do have a look at my blog to see that you have been tagged.

Nor'dzin - I wish I could give you a big hug. I remember how it felt when I had to leave my horses in California for two months as our family moved to the East Coast. Even though I really trusted the people who were caring for them, I still worried and missed Silk and Siete so much. It's good that you can call and check on Dee whenever you want, and I'm sure that Red will flourish with all the extra attention.