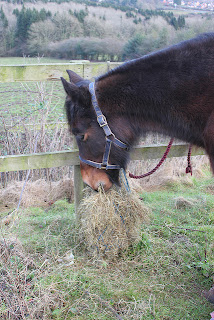 We had friends staying for a few days and they were interested in seeing the horses and riding.  I usually tack up Dee at such times because she is the more cooperative horse with unfamiliar riders.  She came to call as always but was clearly expecting to only be fed and groomed.  She was not too pleased that she was going to be asked to work.  To be fair, I have ridden her very little this winter so it is reasonable that she would assume that today was no different, but she is usually happy to be ridden.

I put her saddle on first and she kept almost nipping me as I did up her girth.  This is more characteristic of Red rather than Dee.  I had not intended to ride but decided that I better ride her first in case she was going to be really difficult.  Then I asked her to take her bridle.  Now I always ask her rather than just put it on her, and she responds by putting her nose into the noseband.  But not this day.  She kept dipping her head and then putting it up in the air looking away from me.  She did this again and again.

Hmmm...  What to do next...?  I decided when I bought Dee that I would not force her in the way I had seen her forced to have a bridle on at Pontcanna riding stables – not cruelly, but against her wish and through dominating her rather than engaging with her to receive her cooperation.   But I also did not want her to get away with calling all the shots.  I have to be the head mare of her herd because she is a dominant mare with a strong personality.  I cannot let her walk over me – or she may in fact walk over me.   I led her into the arena and we walked around for a while and she was fine with this.  Then I unclipped her and sent her away by waving my arms about, shooing her and slapping my leg with the lead rein.  She trotted around me and I looked her in the eye.  When she stopped I turned away from her and she joined up with me.  We walked around the arena together for a few minutes and then I asked her to put her bridle on – still no go.  So I sent her away again and pushed her on for a few minutes by swinging the lead rope and slapping it against my leg again.  Then I let her stop, turned away and waited for her to join up with me.  This time she joined up with her head down and licking her lips.  I offered her her bridle and she immediately put her head in the noseband and accepted it.  I stroked her and told her she was a good girl and led her around with the bridle on for a few minutes.

I felt this was quite an important success for her to accede in this way and I was happy to leave it at that for that session.  So I led her out and gave her her feed.   We can build on this.  She will remember it and hopefully the spring energy she is feeling will be something we can share rather than a source of conflict.