Proud in the spring sunshine 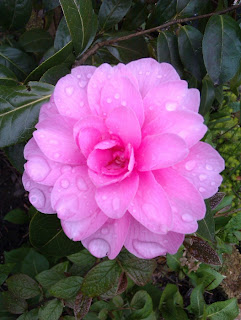 It has been delightfully sunny, warm and spring-like in Cardiff.  The daffodils are in full bloom and the cherry and magnolia blossom is particularly beautiful this year.  Both of the camellia bushes in my garden have the most perfect flowers - one a bright pink and the other a deeper reddish pink.  The forecast however, was that the weather was due to change, with it becoming wet and colder, so I was determined to ride yesterday in the sunshine.

I have not ridden since the end of January, so there was a little nervousness in my stomach.  A ride goes out from Briwnant at 11 am on a Monday, so I set out to join this group.  Red was still out so I caught him, groomed him and tacked him up and managed to be just about ready for 11.  Four of us were going out and I knew them all except for the ride leader who has not been at Briwnant that long.

We headed out for the Wenallt horse trail.  I was surprised when the ride leader suggested a canter near the beginning of the trail because to my eye that part of the trail is downhill and we do not usually canter on group rides if there is even a slight downhill incline.  I was behind the leader so I didn't see what happened but one lady came off.  She hurt her leg and couldn't continue but felt sure she would be okay to walk back.  One of the other riders let go of her horse and the mare decided to go home.  Clearly the ride had to be abandoned. 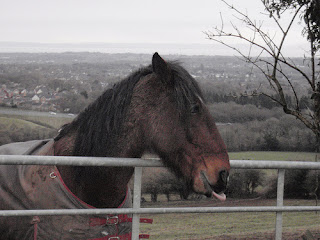 As I was on my own horse of course, it was up to me what I did then.  I could not help the lady who had come off and she was well attended with two other people to help her back to the yard, so I decided to carry on alone.  This must be the first time I have ridden completely alone in nearly two years.  I sang to Red to relax us both and he was a good lad.  He tried to turn round a few times when he thought I might not be paying attention, but I was quite tuned in to Red's intention and was able to respond so immediately that it was never a serious issue.  We had a few canters and trots and enjoyed ourselves.

When we reached the end of the Wenallt trail I decided to turn left instead of right to come back through the woodland and along the track that leads straight into Briwnant's yard.  This route avoids the extremely narrow and steep stretch of Wenallt Road which I never like riding.  If you meet a car someone has to turn round.  As it is so close to home horses can object to turning round at this point and car drivers are not always considerate.  Red was a little unsure about being asked to turn left out of the Wenallt trail, but soon settled down again.

Half way down the track we discovered a closed gate so I had to jump off, untie it and open it.  I had resolved myself to walking the rest of the way leading Red, but then spotted a handy log and successfully lined Red up and jumped back on.  He was most cooperative.  He is a better schooled horse than he was 2 years ago and much easier to work with.  That is down to Briwnant and their expert care.

I feel so happy and proud of myself and Red to have had such a successful solo ride.  It bodes well for my riding this year.

After seeing to Red I drove up to the top fields and found Dee.  I groomed her and gave her a feed.  She is looking a bit moth eaten but otherwise pretty good.  I think I'll start making sure I have her saddle with me when I go up to Briwnant from now on, and if she is down the bottom I can bring her in and ride her a little.  There is a fun ride at the beginning of May.  I will have to ride Dee a few times before then if there is any chance of her being up for it.
Posted by Nor’dzin at 16:37 No comments: