I'm feeling a little shaken up this evening.  I rode Dee this morning – this is becoming a regular Monday morning ride.  This morning we had a lesson rather than going out for a hack.  The lesson was great.  I learned a lot and Sarian of Briwnant is a great teacher.  I understood things that I think they had tried to teach me at Pontcanna but never clearly enough – or perhaps I was just being dense.  Dee responded so well to the slightest aid it was a pleasure to experience what might be possible if I knew more about what I was doing.  I had given up on lessons because of the frustrations of trying to progress when different teachers would contradict one another, but I might have a few at Briwnant. 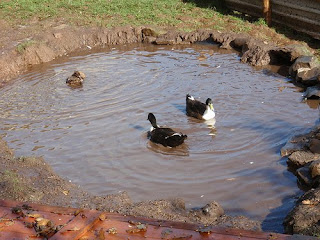 Unfortunately Dee clicked into riding school mode and became a mare I haven't seen for a few years.  When her ears went back, I got scared and let Dee get away with being aggressive.  I sat the bucks as she kicked out at another horse – but only just, and it left me feeling quite shaken.  The other riders kept well away from her after that and I don't blame them, but I feel sad and embarrassed that they had to.  I think I feel shaken from two perspectives – the first is that I felt unsafe, and the second is that Dee hasn't behaved like that for such a long time and I find it upsetting that it happened.  I thought we had moved past that.  Sure she is a dominant mare in the field with the herd, but I have had no trouble with her with other horses on rides for years.  It feels a bit like a failure.

The rhythm beads have arrived and the new hoof boots.  It was too wet and wild today to try the hoof boots, but I wore the rhythm beads around my neck while I groomed Dee so that she could get used to the sound they make.

I've posted a picture of the Briwnant duck pond today.  Dee seems to be fascinated by the ducks, and always asks to stop and watch them for a while when I lead her past the duck pond.  She steps up onto the bank so she can get a good view.  She's such a sweet mare in so many ways.
Posted by Nor’dzin at 22:17 1 comment:

I don't seem to find much time to blog at the moment.  Fortunately I am finding time to continue riding Dee three times a week mostly and she is getting a lot fitter.  Last Monday I hacked out with a couple of Briwnant friends riding Bella and Duke.  I didn't think to ask how long a ride it would be.  When we took the trail down across the stream from the Wenallt I knew we were going as far as the Ganol.  When we carried on down through the Ganol, I guessed we were going to Fforest Fawr.  This meant a two hour ride – longer than Dee and I had been for a while, but fine. 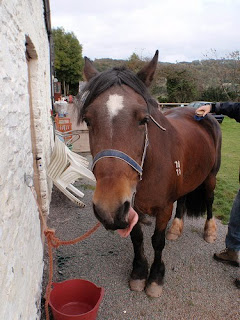 However when we got to the end of Fforest Fawr—where I expected us to head back to the Ganol—Gail took us along a trail that I did not know.  Fforest Fawr is clearly well named (Fawr means big in Welsh) because we rode for another hour.  It was a lovely ride and I did enjoy it, but I kept thinking that I was sure we were still in Fforest Fawr and it was an hour's ride back from there.  All in all it was a three hour ride and getting gloomy by the time we arrived back at the Wenallt trail.  To my amazement Gail wanted to turn left as we came up the hill from the stream and complete the rest of the Wenallt trail.  This would mean a couple of very steep hills on the trail and finish with a long steep bit of road.  Dee was tired and so was I, so I asked if we could go home along the first part of the Wenallt trail which is flatter and has less road work.  They agreed and this was what we did.

I was pleased with Dee's level of fitness.  It had not been a fast or hard ride—mostly walking with a good few trots and a couple of short canters—but still it was more than she had done for about 18 months.  She was hot and sweaty, but not excessively tired.  It was really dark by the time I decided she had cooled down enough to feed her.

It was after this ride that I decided I had to have her clipped because I was concerned about her catching a chill, and this was done this morning.  I bathed her after my ride yesterday and kept her in Red's stable overnight, so that she would be clean, dry and ready for us this morning.  She was an absolute angel and looks lovely.  I feel a bit sorry that she now needs to be rugged to live out, but am happy that she will be more comfortable when we ride.

Yesterday we tried hacking out alone again.  This time I decided to try the ride in the more challenging direction – beginning with the track.  She was very slow going along the track, taking short, tense steps.  A couple of times she stopped and I wondered if that was it, but then she carried on.  Eventually we arrived at the little gate and went up into the fields through the bracken, where Dee adopting a more relaxed gait.  She would not go up through the top field so I compromised and let her cut across it.  We then went down and along a new track that Paul has recently cut through the bracken.  She took this completely new path without hesitation.  It is not finished yet, so we had to turn at the end.  We then returned to the gate and back down the track – a complete hack alone again.  Woohoo!!!  I think I'm going to do this little hack once a week as I believe it will slowly build up her confidence about going out on her own.  I think there are a couple of other little hacks on Briwnant land that we can try as well.

The first set of hoof boots I ordered for Dee were not satisfactory and I have sent for a different type.  I'll report on those when they arrive.  I've also ordered some 'rhythm beads'.  These may be a weird new age fad or they may be an amazing native american idea – we shall see.  It looks like a horse necklace and jingles.  The theory is that a. the constant gentle sound stops a spooky horse being so sensitive to the noises they hear when they are out hacking, and b. that the sound of the beads being in rhythm with the natural movement of the horse has a soothing and claming effect.  Interesting.  I'll let you know how that turns out as well – something to try in the arena first I think!
Posted by Nor’dzin at 00:06 2 comments: